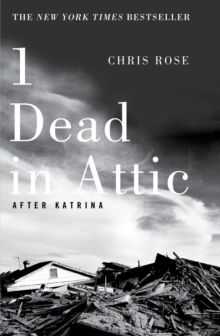 1 DEAD IN ATTIC: AFTER KATRINA

Product Description Originally a self-published sensation by a Pulitzer Prize-winning author, 1 Dead in Attic captures the heart and soul of New Orleans in the immediate aftermath of Hurricane Katrina. 1 Dead in Attic is a collection of stories by Times-Picayune columnist Chris Rose, recounting the first harrowing year and a half of life in New Orleans after Hurricane Katrina. Celebrated as a local treasure and heaped with national praise, Rose provides a rollercoaster ride of observation, commentary, emotion, tragedy, and even humorâ€”in a way that only he could find in a devastated wasteland. They are stories of the dead and the living, stories of survivors and believers, stories of hope and despair. And stories about refrigerators. 1 Dead in Attic freeze-frames New Orleans, caught between an old era and a new, during its most desperate time, as it struggles out of the floodwaters and wills itself back to life. From Publishers Weekly Starred Review. The physical and psychic dislocation wrought by Hurricane Katrina is painstakingly recollected in this brilliant collection of columns by award-winning New Orleans Times-Picayune columnist Rose (who has already hand-sold 60,000 self-published copies). After evacuating his family first to Mississippi and then to his native Maryland, Rose returned almost immediately to chronicle his adopted hometown's journey to "hell and back." Rose deftly sketches portraits of the living, from the cat lady who survives the storm only to die from injuries sustained during a post-hurricane mugging, to the California National Guard troops who gratefully chow down on steaks Rose managed to turn up in an unscathed French Quarter freezer. He's equally adept at evoking the spirit of the dead and missing, summed up by the title, quoting the entirety of an epitaph spray-painted on one home. Although the usual suspects (FEMA and Mayor Ray Nagin, among others) receive their fair share of barbs, Rose's rancor toward the powers that be is surprisingly muted. In contrast, he chronicles his own descent into mental illness (and subsequent recovery) with unsparing detail; though his maniacal dedication to witnessing the innumerable tragedies wrought by "The Thing" took him down a dark, dangerous path ("three friends of mine have, in fact, killed themselves in the past year"), it also produced one of the finest first-person accounts yet in the growing Katrina canon. Copyright Â© Reed Business Information, a division of Reed Elsevier Inc. All rights reserved. From Booklist Hurricane Katrina boostedÂ Rose's career and damn near destroyed his life. A columnist for the Times-Picayune, Rose wrote disarmingly direct, funny, and fully loaded essays about the horrific aftermath of the storm, the terror and loss, injustice and irony. An intrepid explorer of the wreckage, Rose chroniclesÂ the decimated city's horrible smell,Â daunting debris, andÂ Twilight Zone atmosphere. Rose jokes about how Survivor should have been set in New Orleans and tells jaw-dropping and heartwarming stories about chance and stoicism, brutality andÂ heroism.Â Readers love and rely on his column, which earns him a Pulitzer, and when he self-publishes a collection of his essays, it promptly sells 65,000 copies. But as a conduit for all the sorrows of the lost city, Rose experiences a catastrophic inner storm and candidly reports on his plunge intoÂ depression. This frank and compelling collection combinesÂ Rose's original book withÂ later dispatches from hellÂ covering all of 2006 and adding up toÂ vivid and invaluable testimony to the true repercussions, public and personal,Â ofÂ the devastation of a city. Seaman, Donna Review "The Crescent City's bard" -- Harry Shearer, The Huffington Post "These are impressionistic cries of pain and mordant humor...they so aptly mirrored the sense of surreal dislocation experienced by New Orleanians that they turned Rose into a voice of the tortured city." -- Ken Ringle, The Washington Post Book World "The