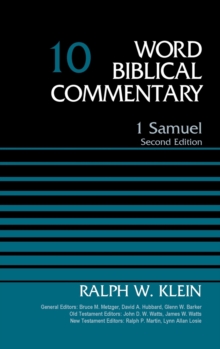 Product Description The Word Biblical Commentary delivers the best in biblical scholarship, from the leading scholars of our day who share a commitment to Scripture as divine revelation. This series emphasizes a thorough analysis of textual, linguistic, structural, and theological evidence. The result is judicious and balanced insight into the meanings of the text in the framework of biblical theology. These widely acclaimed commentaries serve as exceptional resources for the professional theologian and instructor, the seminary or university student, the working minister, and everyone concerned with building theological understanding from a solid base of biblical scholarship. Â  Overview of Commentary Organization Introductionâ€”covers issues pertaining to the whole book, including context, date, authorship, composition, interpretive issues, purpose, and theology. Each section of the commentary includes: Pericope Bibliographyâ€”a helpful resource containing the most important works that pertain to each particular pericope. Translationâ€”the authorâ€™s own translation of the biblical text, reflecting the end result of exegesis and attending to Hebrew and Greek idiomatic usage of words, phrases, and tenses, yet in reasonably good English. Notesâ€”the authorâ€™s notes to the translation that address any textual variants, grammatical forms, syntactical constructions, basic meanings of words, and problems of translation. Form/Structure/Settingâ€”a discussion of redaction, genre, sources, and tradition as they concern the origin of the pericope, its canonical form, and its relation to the biblical and extra-biblical contexts in order to illuminate the structure and character of the pericope. Rhetorical or compositional features important to understanding the passage are also introduced here. Commentâ€”verse-by-verse interpretation of the text and dialogue with other interpreters, engaging with current opinion and scholarly research. Explanationâ€”brings together all the results of the discussion in previous sections to expose the meaning and intention of the text at several levels: (1) within the context of the book itself; (2) its meaning in the OT or NT; (3) its place in the entire canon; (4) theological relevance to broader OT or NT issues. General Bibliographyâ€”occurring at the end of each volume, this extensive bibliography contains all sources used anywhere in the commentary. About the Author Ralph W. Klein is Christ Seminary-Seminex professor of Old Testament at the Lutheran School of Theology at Chicago (LSTC). He has written for numerous journals, has been editor of Currents in Theology and Mission since 1974, and is an associate editor of the Catholic Biblical Quarterly. His books include Textual Criticism of the Old Testament, Israel in Exile, Ezekiel: the Prophet and his Message; and the commentary on Ezra and Nehemiah in the New Interpreter's Bible. Klein received his M.Div. from Concordia Seminary, St. Louis, and his Th.D. from Harvard University. Bruce M. Metzger (1914 â€“ 2007) was a biblical scholar, textual critic, and a longtime professor at Princeton Theological Seminary. Metzger is widely considered one of the most influential New Testament scholars of the 20th century.Â He was a general editor of the Word Biblical Commentary (1997 - 2007). David Allan Hubbard (1928 â€“ 1996), former president and professor of Old Testament at Fuller Theological Seminary in Pasadena, California, was a recognized biblical scholar. In addition to over 30 books, he has written numerous articles for journals, periodicals, reference works. He was a general editor of the Word Biblical Commentary (1977 - 1996). Glenn W. Barker (d. 1984) was a general editor of the Word Biblical Commentary (1977 - 1984).Â  John D. W. Watts (1921 â€“ 2013) was President of the Baptist Theological Seminary, Ruschlikon, Switzerland, and served as Professor of Old Testament at that institution, at Fuller Theological Seminary, and the Southern Baptist Theological Semina