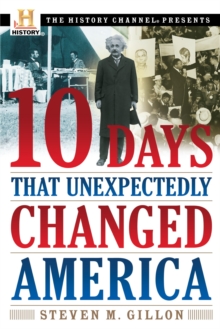 Product Description A companion book to The History ChannelÂ® special series of ten one-hour documentaries 10 Days That Unexpectedly Changed America pinpoints pivotal days that transformed our nation. For the series and the book, The History Channel challenged a panel of leading historians, including author Steven M. Gillon, to come up with some less well-known but historically significant events that triggered change in America. Together, the days they chose tell a story about the great democratic ideals upon which our country was built. You wonâ€™t find July 4, 1776, for instance, or the attack on Fort Sumter that ignited the Civil War, or the day Neil Armstrong set foot on the moon. But January 25, 1787, is here. On that day, the ragtag men of Shaysâ€™ Rebellion attacked the federal arsenal in Springfield, Massachusetts, and set the new nation on the path to a strong central government. January 24, 1848, is also on the list. Thatâ€™s when a carpenter named John Marshall spotted a few glittering flakes of gold in a California riverbed. The discovery profoundly altered the American dream. Here, too, is the day that noted pacifist Albert Einstein unwittingly advocated the creation of the Manhattan Project, thus setting in motion a terrible chain of events. Re-creating each event with vivid immediacy, accessibility, and historical accuracy, 10 Days That Unexpectedly Changed America comes together as a history of our country, from the first colonistsâ€™ contact with Native Americans to the 1960s. It is a snapshot of our country as we were, are, and will be. About the Author Steven M. Gillon is the resident historian of The History Channel and host of HistoryCENTER. Having taught at both Oxford and Yale, he is currently a professor at the University of Oklahoma. Excerpt. Â© Reprinted by permission. All rights reserved. 1 May 26, 1637 Massacre at Mystic On the moonlit night of May 26, 1637, Puritans from Massachusetts Bay Colony attacked a large Pequot village at a place called Missituck, located near the Mystic River in Connecticut. The assault began on May 25 with an all-day march through solidly held Pequot territory. As dusk approached, the seventy English, seventy Mohegans, and five hundred Narragansetts warriors led by Major John Mason and Captain John Underhill reached the outskirts of the Mystic settlement, where they decided to rest for a few hours. By 2 A.M. on the morning of the twenty-sixth, the English were poised to put an end to the war that had been raging between them and the Pequot for more than a year. With the aid of clear skies and a brightly lit moon they began their final assault. Mason and Underhill divided their forces into northern and southern contingents and attacked through the two entrances to the village. According to their own accounts, Mason led his men through the northeast gate when he "heard a Dog bark, and an Indian crying Owanux! Owanux! Which is Englishmen! Englishmen!" After removing piles of tree branches that blocked their approach, Captain Underhill led his men through the other entrance with "our swords in our right hand, our carbines and muskets in our left hand." The Pequots, initially startled by the attack, quickly regrouped and pelted the invaders with arrows. Two Englishmen were killed and twenty others wounded. Some were shot "through the shoulder, some in the face, some in the legs." Instead of engaging the Englishmen, many of the Pequots, especially women and children, stayed huddled in their wigwams. Frustrated that his enemy refused to fight by traditional European rules of engagement, Mason decided to burn the village. He lit a torch, setting fire to the wigwams. At the same time, Captain Underhill "set fire on the south end with a train of powder. The fires of both meeting in the center of the fort, blazed most terribly, and burnt all in the space of half an hour." Dozens of men, women, and children were burned alive. Mason observed that the Pequots were "most