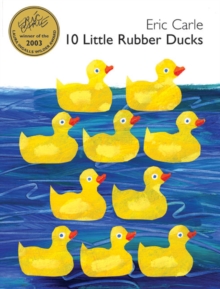 Product Description Ahoy! This classic from the New York Times bestselling author of The Very Hungry Caterpillar and The Grouchy Ladybug stars 10 little rubber ducks and their globe-trotting adventures. In Eric Carleâ€™s poignant and funny story, illustrated with strikingly designed collages, readers are taken on an exciting voyage of discovery. "Ducks overboard!" shouts the captain, as a giant wave washes a box of 10 little rubber ducks off his cargo ship and into the sea. One drifts west, where a friendly dolphin jumps over it. A whale sings to another. But as the sun sets, the 10th little rubber duck is left all alone, bobbing helplessly on the big wide sea. Following the little ducks as they float to all parts of the globe, young explorers can see for themselves the meanings of directional words and learn simple math concepts, such as counting and the use of cardinal and ordinal numbers. Each creature the ducks meet is seen in its own habitat and behaves in a true-to-life manner, offering a very simple first view of biology and geography. Small readers and listeners will empathize with the little duck's plightâ€”and will rejoice at the heartwarming surprise ending. "AÂ wonderful read-aloud for storytimes or one-on-one sharing. It's a definite 10," commentedÂ School Library Journal in a starred review. "Beautifully composed illustrations," said Booklist.Â "As sublimely simple and endearing as the playthings it portrays," agreed Publishers Weekly. From School Library Journal Starred Review. PreSchool-Grade 1 - Carle takes an actual incident, when numerous bathtub toys fell off a container ship and floated to various places, and distills it to create a marvelous counting/concept adventure. The story opens at a factory where assembly-line workers are painting details onto bright yellow rubber ducks. The toys are then loaded onto a freighter destined for faraway countries. During a storm, 10 rubber ducks fall into the sea. Each one floats in a different direction - west, east, north, south, left, right, up, down, this way, and that way - and encounters a different animal (a dolphin, seal, polar bear, etc.). The 10th one meets a mother duck with her offspring and bobs along with them to their nest. The ducks all bid "Good night" to one another with a "Quack," while the newcomer says "Squeak!" (Children can press the page to hear a squeak.) Carle's signature cut-paper collages burst with color, texture, light, and motion, delighting the eye and bringing out the text's nuances. The ordinal numbers are shown in bold type that stands out from the narrative. More accessible to younger readers than Eve Bunting's Ducky (Clarion, 1997), this book makes a wonderful read-aloud for storytimes or one-on-one sharing. It's a definite 10. - Linda Staskus, Cuyahoga County Public Library, Parma, OH Copyright Â© Reed Business Information, a division of Reed Elsevier Inc. All rights reserved. From Booklist PreS-Gr. 1. A ship loaded with boxes of rubber ducks is traveling across the sea when a storm blows up and dumps 10 of the toys into the water. The ducks bob along together for a while, but soon they drift in different directions, each encountering an animal, such as a dolphin, a seal, a polar bear, and a flamingo. The last little duck is adopted by a mother duck, floating along with her ducklings. When the real ducks end their day with a goodnight "quack," the rubber duckie, aided by children who "press here" on the duck's body, manages a squeak. The simple, appealing story is greatly enhanced by beautifully composed illustrations. From the distinctive use of negative space on the title page and the watery finger-paint effects in some ocean scenes to the rich combination of patterns on the final double-page spread, Carle uses cut-paper collage with a fine sense of freedom and artistry. Carolyn Phelan Copyright Â© American Library Association. All rights reserved Review â€œA marvelous counting/concept adventure. A wonderful read-aloud. Itâ€™