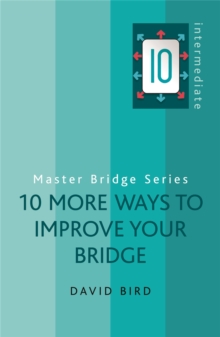 In this book David Bird builds on TEN WAYS TO IMPROVE YOUR BRIDGE and presents ten further ways to increase success at the bridge table. In the area of bidding, the Jacoby 2NT convention is described - the most popular way nowadays of showing a strong major-suit raise and investigating slam possibilities. When bidding slams, it is critical to identify the presence or otherwise of the six key cards (the four aces and the king-queen of trumps) Roman Key-card Blackwood allows you to do this.

Two important variations (Kickback Blackwood and Exclusion Blackwood) are explained. The Lebensohl convention is covered also, both when partner's INT has been overcalled and when you are responding to a double of a weak-two bid. On defence, the important topic of disrupting declarer's communications is explained. The book will also show how you can become an 'awkward defender', the sort of player that no declarer likes to face.

Finally, five important areas of declarer play are addressed: holding up in a suit contract, using the entries provided by the trump suit, how to block the defenders' suit at no-trumps, the various ways to avoid an adverse ruff or overruff and how to overcome a 4-1 trump break.