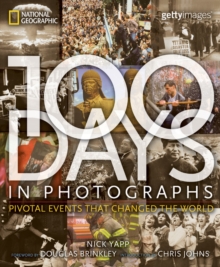 100 DAYS IN PHOTOGRAPHS: PIVOTAL EVENTS THAT CHANGED THE WORLD

Product Description Much more than a book of pictures, 100 Days in Photographs is a compelling visual journey through our age?an odyssey that's personal and universal, immediate and timeless. To create it, Getty Images and National Geographic identified 100 days that represent defining moments of the past 150 years... and crystallized them with photographs that leap from the page to evoke joy and anger, triumph and despair. Supporting the visuals are firsthand journal excerpts, photographers' on-site notes, and insightful text by photography historian Nick Yapp. From the Getty Images archive, astonishing images depict major world events: revolution in 19th-century Europe, President Lincoln's assassination, the Eiffel Tower's construction from 1887 to 1889, Bleriot flies the English Channel in 1909, the Wall Street crash of 1929, Germany's Kristallnacht, the British quit India in 1947, and more. National Geographic's contributions illustrate scientific, cultural, and geographical topics?including the 1906 San Francisco earthquake, Jane Goodall's study of chimpanzees, Chernobyl's nuclear disaster, the cloning of sheep, the attacks of September 11, 2001, and today's global warming debate. Page after eye-catching page reveals the emotion of an entire event or age captured in a single image?whether of a peasant's tears, of world leaders sharing a secret, or the triumph of an Olympic champion. Politics, war, crime, technology, achievement, fads, and fashion all figure into the life and legacy of these 100 days. Featuring scores of rare and unpublished photographs uncovered during its creation, this remarkable book provides new perspective on key events and personalities of the past 150 years. About the Author Nick Yapp is the author of A Photographic History, Bon Voyage, and other books chronicling history and photography. He has also written for television and radio. Douglas Brinkley is a best-selling author and official historian for CBS. Additionally, is director of the Theodore Roosevelt Center at Tulane University. Chris Johns, ninth Editor-in-Chief of National Geographic magazine, is noted for his defining photographs of African wildlife.