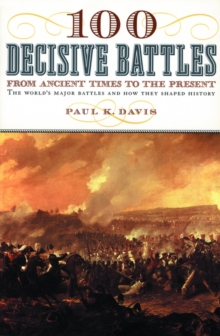 100 DECISIVE BATTLES: FROM ANCIENT TIMES TO THE PRESENT

Product Description From the ancient Egyptian battle at Megiddo in 1469 BC to the recent military actions in Iraq, great battles have had an enormous impact on the shaping of history. Now, in this fully illustrated book, one hundred of the world's most important military confrontations are described in detail. 100 Decisive Battles gives us the facts about the battle and also explains where it fits in to the scope of world history. In each entry we are given the name and date of the battle, the commanders, the size of the opposing forces, and casualties. An account of the battle plan and the military action are strategically discussed, and each description closes with a valuable consideration of how history was affected by the outcome of the conflict. Among the battles presented are the Battle of Thymbra (546 BC), the Battle of Chalons (451 AD), the Battle of Cajamarca (1532), the Battle of Dien Bien Phu (1954), and the Tet Offensive (1968). Accompanying maps and sidebars help further orient us with each military action. Global in scope, with excellent coverage of American, Central American, European, Asian, and Middle Eastern battles, and with its stirring accounts of familiar battles and many lesser known military conflicts, 100 Decisive Battles is essential reading for military buffs and anyone interested in how the modern world came to be. Amazon.com Review Sometimes a battle, such as the one that raged along France's Marne River in 1918, involves hundreds of thousands of soldiers and costs many lives. Sometimes, as in the case of Tippecanoe, a battle involves only a few hundred fighters. Great or small, as historian Paul Davis notes, history has turned on clashes such as these. In this well-researched compendium, Davis examines battles that have had far-reaching historical consequences. The first entry covers the Battle of Megiddo, which delivered unto the Egyptian pharaoh Thutmose III an uneasy dominion over Palestine and broadened his empire into Asia; the final entry, set not far from the first, describes the Allied victory over Iraq in Desert Storm, which "denied control of a large portion of the Middle East oil reserves to dictator Saddam Hussein and showed the ability of a multinational coalition to succeed in the post-Cold War world, perhaps setting an example of future international military action." In between Davis considers similarly fateful but often forgotten contests, such as the Battle of Chalons, when another coalition--this one of Visigoths, Romans, and Gallic and Germanic tribes--turned back the huge Mongol army of Attila in A.D. 451, and the Battle of Shanhaikuan, when, in the spring of 1644, China's Ming dynasty fell to Manchu invaders. Davis sometimes prefers sweeping themes to mundane realities (the fact, for instance, that the Battle of Adrianople turned on the recent invention of the stirrup), and his compendium tends heavily toward Europe at the expense of other parts of the world. The illustrations are also of uneven quality and usefulness. Still, readers with an interest in military history will find this to be a handy reference and overview, and they'll enjoy second-guessing the author, nominating battles that didn't make his hundred while learning from the obscure, but nonetheless critical, ones that he does address. --Gregory McNamee Review "This is a very interesting book that concentrates on the greatest battles in world history that have changed the history of mankind sometimes for the better and sometimes for the enslavement of men and governments." -- The Lone Star Book Review "Davis describes significant military actions in detail, telling how world history was shaped by the outcome. The entries are presented chronologically for easy reference." -- Troy Record "Students of military history will find 100 Decisive Battles an important reference to the world's major battles. It covers conflicts from ancient to modern times, providing details on the historical setting, the c