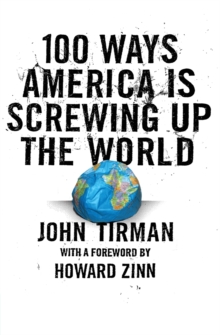 100 WAYS AMERICA IS SCREWING UP THE WORLD

Product Description What do George W. Bush, Wal-Mart, Halliburton, gangsta rap, and SUVs have in common? They're all among the hundred ways in which America is screwing up the world. The country that was responsible for many, if not most, of the twentieth century's most important scientific and technological advancements now demonizes its scientists and thinkers in the twenty-first, while dumbing down its youth with anti-Darwin/pro-"Intelligent Design" propaganda. The longtime paragon of personal freedoms now supports torture and illegal wiretapping—spreading its principles and policies at gunpoint while ruthlessly bombing the world with Big Macs and Mickey Mouse ears. At once serious-minded and satirical, John Tirman's 100 Ways America Is Screwing Up the World is an insightful, unabashed, entertaining, and distressing look at where we've gone terribly wrong—from the destruction of the environment to the promotion of abhorrent personal health and eating habits to the "wussification" of the free press—an alternately admonishing and amusing call to arms for patriotic Blue America. From Publishers Weekly As a liberal response to the wealth of pop conservative writingâ€”such as last year's 100 People Who Are Screwing Up America by Bernard Goldberg and Peter Schweitzer's Do as I Say (Not as I Do): Profiles in Liberal Hypocrisyâ€”this collection of 100 pithy salvos against current U.S. culture, and domestic and foreign policy hits its mark. Tirman, an unabashed liberal and the executive director of MIT's Center for International Studies, has a sly style and makes his often predictable points with unexpected panache. Whether he 's skewering the American obsession with consumerism, the rise of the pro-war progressive ("when I see a liberal hawk, I smell a rat") or the recent globalization of Christian evangelism, Tirman stays just this side of cranky and avoids preaching only to the converted. About a third of the time, he makes arresting points, such as that the media obsesses over white "damsels in distress," like Laci Peterson or Natalee Holloway, while refusing to discuss truly important issues such as "rapes of girls as a weapon of war." As quick-sketch political commentary goes, these laconic essays are terrific. But the bottom line is that while Tirman is arguably fairer and more nuanced than Goldberg or Schweitzer, none of these books contributes to substantive political understanding or debate. (Aug. 1) Copyright Â© Reed Business Information, a division of Reed Elsevier Inc. All rights reserved. About the Author John Tirman is executive director of MIT's Center for International Studies. He is the author, or coauthor and editor, of nine books on international affairs. His work has appeared in the New York Times, the Washington Post, The Nation, the Wall Street Journal, and the International Herald Tribune. He lives in Cambridge, Massachusetts.