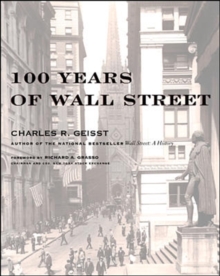 Product Description Financial ups and downs are only part of the 20th century saga of Wall Street. The street symbolizes the historic triumphs, failures and excesses of capitalism, but it has also been the scene of great human achievements and epic tragedies. Like America itself, "The Street" has shown almost boundless optimism and tenacity in the face of adversity. It has also revealed a surprising weakness for foolishness along with an unpredictable capacity for bursts of genius, innovation and success. That is why 100 YEARS OF WALL STREET, the story of the world's financial center, is also the story of our American century from our first uncertain steps on the international stage to the responsibilities and challenges we face as the sole superpower at the end of the millennium. The expert and occasionally bemused guide to the story is Charles R. Geisst, who is renowned as a historian, best-selling author, financial scholar and corporate consultant. He is also a gifted storyteller who reveals how the smallest details produce crucial shifts in the big picture. With wit and profound insight, Geisst takes the reader behind the scenes to explain how powerful personalities and unexpected developments created the financial, cultural and social events that helped shape our world. We are the heirs of Wall Street's phenomenal achievement, but it has also fueled runaway greed. It has contributed to growth while scrapping large sectors of the economy. Is the market "fair" or "just"? What do such questions really mean? Geisst dramatically brings to life a world that can only be fully understood by following its secret deals, monumental transactions, colorful characters, earth-rattling market collapses and exhilarating highs. There are 200 photographs and other illustrations 100 YEARS OF WALL STREET, many of them rarely reproduced. They portray famous crises, the day-to-day grind and, above all, many of the human beings who toiled, schemed or created wise reforms at the center of global financial activity. The careers and personalities of the century's wealthiest men -- Vanderbilts, Carnegies, Morgans, Milkens, Boeskys -- become an important part of Geisst's fascinating history. On the one hand, there were the Titans who shrewdly built their investments into vast fortunes and just as cleverly built solid public reputations. In contrast were the high-rollers and outlaws who fell off the tightrope, winding up as suicides or bankrupts or convicted felons. Decade-by-decade, with the most important dates highlighted, 100 YEARS OF WALL STREET is a deftly crafted introduction to the compelling true story of "The Street." It is also a rich source of little-known anecdotes and new insights for anyone who invests or works in today's financial climate. Geisst places the present in the context of a century of chaos and corruption, leadership and huge losses, insider trading and ticker-tape parades. His unforgettable scandalous tales, hilarious anecdotes and legendary rumors have never been reported in the Dow Jones average. With market levels at astronomical highs, no one can question the powerful role played by Wall Street and its movers and shakers today. For an engaging and solidly researched account of its century-long grip on American history, 100 YEARS OF WALL STREET earns a permanent place in the library of anyone who wants to understand the background of today's bull market and the wide range of possible scenarios for the future. Amazon.com Review In 100 Years of Wall Street, Charles Geisst (author of Wall Street: A History) takes us on a tour of one of America's most storied institutions. From the early bucket shops at the turn of the century to Maria Bartiromo of CNBC, Geisst, with the help of a collection of pictures, charts, cartoons, and stock certificates presents an entertaining look at the remarkable changes that have transformed this small corner of New York into the cornerstone of the world's financial markets. From the Bac