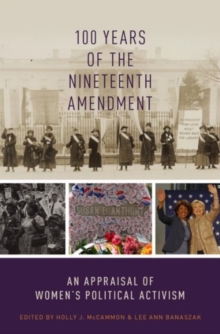 100 YEARS OF THE NINETEENTH AMENDMENT: AN APPRAISAL OF WOMEN'S POLITICAL ACTIVISM

Product Description The year 2020 will mark the 100th anniversary of the Nineteenth Amendment giving many women in the United States the right to vote. The struggle for suffrage lasted over six decades and involved more than a million women; yet, even at the moment of the amendment's enactment, women's activists disagreed heartily over how much had been achieved, whether it was necessary for women to continue organizing for political rights, and what those political rights would bring. Looking forward to the 100-year anniversary of the passage of the Nineteenth Amendment, this collection of original essays takes a long view of the past century of women's political engagement to gauge how much women have achieved in the political arena. The volume looks back at the decades since women won the right to vote to analyze the changes, developments, and even continuities in women's roles in the broad political sphere. Ultimately, the book asks two important questions about the last 100 years of women's suffrage: 1) How did the Nineteenth Amendment alter the American political system? and 2) How has women's engagement in politics changed over the last 100 years? As the chapters reveal, while women have made substantial strides in the political realm--voting at higher rates than men and gaining prominent leadership roles--barriers to gender equality remain. Women continue to be underrepresented in political office and to confront gender bias in a myriad of political settings. The contributors also remind us of the important understanding to be gained from an intersectional perspective to women's political engagement. In particular, several chapters discuss the failure of the Nineteenth Amendment to provide full political rights and representation to African American, Latina, and poorer women. The work also considers women's extra-institutional activism in a wide variety of settings, including in the feminist, civil rights, environmental, and far-right movements. As the volume traces women's forceful presence and limitations in politics over the past century, it also helps us look forward to consider the next 100 years: what additional victories might be won and what new defeats will need women's response? Review "This collection not only advances a debate about the character and consequences of women's political participation, it also functions as a survey of current scholarship that introduces key concepts along with diverse methods and sources of evidence." -- Elisabeth S. Clemens, Mobilization "This multi-disciplinary volume enhances our theoretical understanding of the long-term outcomes of social movements as well as our knowledge of the history and impact of the women's suffrage movement. It contributes important new historical and intersectional research on the engagement of women in public life." --Suzanne Staggenborg, University of Pittsburgh "This book's mix of the reassessment of women's political history and current subjects like Occupy Wall Street and Latina political participation offers the reader a real century of perspective. The text is ideal for helping advanced undergraduates understand both constituency and change in women's political activism." --Tracy Osborn, The University of Iowa "McCammon and Banaszak provide readers an unflinching account of how suffrage increased women's power at the ballot and in social movements across the political spectrum." --Deana A. Rohlinger, Florida State University "This is a must-read book to understand where we've been and how we're going to move ahead in the next 100 years." --Leila J. Rupp, University of California, Santa Barbara About the Author Holly J. McCammon is Cornelius Vanderbilt Professor of Sociology, and Affiliated Professor of Women's and Gender Studies and American Studies at Vanderbilt University. Her recent book is The U.S. Women's Jury Movements and Strategic Adaptation: A More Just Verdict. She is a former editor of the American Sociological