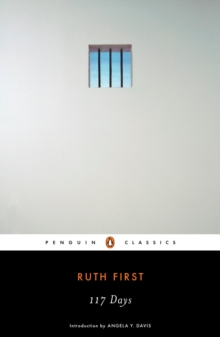 117 DAYS: AN ACCOUNT OF CONFINEMENT AND INTERROGATION UNDER THE SOUTH AFRICAN 90-DAY DETENTION LAW (PENGUIN CLASSICS)

Product Description An unforgettable account of defiance against political terror by one of South Africa's pioneering anti-apartheid activists An invaluable testimonial of the excesses of the apartheid system, 117 Days presents the harrowing chronicle of journalist Ruth First's isolation and abuse at the hands of South African interrogators after her arrest in 1963. Upon her arrest, she was detained in solitary confinement under South Africa's notorious ninety-day detention law. This is the story of the war of nerves that ensued between First and her Special Branch captors-a work that remains a classic portrait of oppression and the dignity of the human spirit. For more than seventy years, Penguin has been the leading publisher of classic literature in the English-speaking world. With more than 1,700Â titles, Penguin Classics represents a global bookshelf of the best works throughout history and across genres and disciplines. Readers trust theÂ series to provide authoritative texts enhanced by introductions and notes by distinguished scholars and contemporary authors, as well as up-to-dateÂ translations by award-winning translators. Review "[Ruth First's] life, and her death, remains a beacon to all who love liberty." - Nelson Mandela, at the commemoration of the tenth anniversary of Ruth First's murder About the Author Ruth First (1925â€“1982) was a journalist, editor, activist and author whose leadership in the anti-apartheid movement put her in the sights of South Africaâ€™s notoriously repressive law enforcement community. She left South Africa in March 1964 and published her record of the ordeal and played herself in the BBC production. She edited a collection of Nelson Mandelaâ€™s articles and speeches entitled No Easy Walk to Freedom. On August 17th, 1982, Ruth First was killed by a letter-bomb sent to her by the South African security police. Angela DavisÂ is Professor Emerita of History of Consciousness and Feminist Studies at the University of California Santa Cruz. She is the author of eight books. In 1970, she was placed on the FBIâ€™s â€œTen Most Wantedâ€ list for her involvement in the campaign to free the Soledad Brothers.