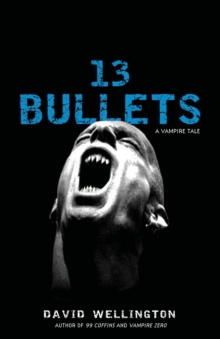 Product Description The first book in the Laura Caxton Vampire series from the author of theÂ Monster Island trilogy. All the official reports say that vampires are dead--extinct since the late â€™80s, when FBI agent Arkeley defeated the last vampire in a fight that nearly killed him. But when state trooper Laura Caxton calls the FBI looking for help in the middle of the night, Arkeley is unsurprised to hear that it sounds like a vampire attack. Heâ€™s been expecting such a call to come eventually. Sure, it has been years since any signs of an attack, but Arkeley knows what most people donâ€™t: there is one left. In an abandoned asylum she is rotting, plotting, and biding her time in a way that only the undead can. Laura Caxton is out of her league on this case and more than a little afraid. Arkeley made it clear there is only one way out. The worst thing is the feeling that the vampires want more than just her blood. They want her for a reason, one she canâ€™t guess; a reason her sphinxlike partner knows but wonâ€™t say; a reason she has to find out-or die trying. From Publishers Weekly Minimally plotted and driven by nonstop action, this gory vampire tale is of a piece with Wellington's zombie novels ( Monster Island; Monster Nation). Special deputy Jameson Arkeley stopped a vampire rampage 20 years earlier, during which he whittled down all known bloodsuckers to a single survivor, Justinia Malvern. Kept alive at a sanitarium in rural Pennsylvania by minimal life support and bizarre laws preventing her extermination, wispy Justinia seems a threat to no oneâ€”until a series of vampire killings in the area suggest that she has found a secret way to spread her taint. Convinced that Justinia's minions plan to spring her and revive her to full power, Arkeley commandeers state trooper Laura Caxton to help him find their lair and wipe them out before they can get their vampire queen the blood she needs. A surprisingly anticlimactic finale leaves loose ends that will likely be tied up in subsequent volumes of a projected trilogy. (May) Copyright Â© Reed Business Information, a division of Reed Elsevier Inc. All rights reserved. Review â€œIn 13 BULLETS, David Wellington focuses his ample powers of imagination on modernizing the vampire legend. The result is a charming, funny, bloody, and best of all, thrilling adventure. FBI vampire hunters Caxton and Arkeley make an electric duo. Thwarting them at every turn from within the walls of a maximum security prison, ringleader Malvern is a diabolical cross between Hannibal Lecter and one of Anne Rice's ancients.â€ â€”Sarah Langan, author of THE KEEPER â€œLace collars and kerchiefs are nowhere to be found in this breakneck, blood-spattered, totally original vampire novel.Â  Breathless, exciting and totally kick ass.â€ -- B. H. Fingerman, author of Bottomfeeder About the Author David Wellington is the author of the Monster Island trilogy. He lives in New York City with his wife, Elisabeth. He maintains his popular website at www.davidwellington.net. Excerpt. Â© Reprinted by permission. All rights reserved. 1. Incident report filed by Special Deputy Jameson Arkeley, 10/4/83 (recorded on reel-to-reel audiotape): Through the rain there wasn't much to see. The all-night diner stood at the corner of two major streets. Its plate glass windows spilled a little light on the pavement. I handed the binoculars to Webster, my partner. "Do you see him?" I asked. The subject in question, one Piter Byron Lares (probably an alias), sat at the diner's counter, hunched over in deep conversation with a middle-aged waitress. He would be a big man if he stood up, but leaning over like that, he didn't look so imposing. His face was very pale, and his black hair stood up in a wild shock of frizzy curls. An enormous red sweater hung off him--another attempt at camouflaging his size, I figured. He wore thick eyeglasses with tortoiseshell rims. "I don't know what they teach you at Fed school, Arkeley, but I'v