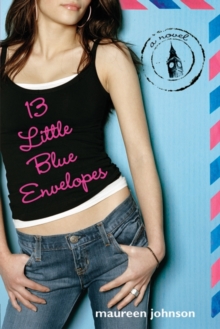 Product Description When Ginny receives thirteen little blue envelopes and instructions to buy a plane ticket to London, she knows something exciting is going to happen. What Ginny doesn't know is that she will have the adventure of her life and it will change her in more ways than one. Life and love are waiting for her across the Atlantic, and the thirteen little blue envelopes are the key to finding them in this funny, romantic, heartbreaking novel. From School Library Journal Grade 8-10â€“This whirlwind adventure begins as Ginny, 17, reads a letter from her free-spirited, unpredictable Aunt Peg, who has recently passed away. She is given several destinations, four rules, and the instruction to open one envelope upon her arrival at each place. Thus begins a rapid tour of Europe as the teen struggles to accomplish the tasks established by her aunt. The motivation: Ginny wants to understand the woman's wanderlust and, possibly, she just wants a connection to her beloved relative. Throughout her adventures in Rome, Paris, Greece, England, and the Netherlands, the teen collects pieces of Peg's past and learns more about her rapid departure. She also learns much about herself. The reason Ginny is sent to meet certain people is not always clear; sometimes she (and readers) wonder about the point of the exercise. Overall, though, the novel drives home the importance of family, love, and the value of connections that you make with people. It is a quick read that will interest high school girls. â€“Emily Garrett, Naaman Forest High School, Garland, TX Copyright Â© Reed Business Information, a division of Reed Elsevier Inc. All rights reserved. From Booklist Gr. 8-11. Seventeen-year-old Ginny had always admired her aunt Peg, a free-spirited artist who often disappeared for months, most recently to Europe. Now Aunt Peg has died of brain cancer, and in a characteristically cryptic gesture made before her death, she arranged for her niece to receive a plane ticket to London, where Ginny will begin a series of adventures. Guided by Peg's friends and the instructions in each of 13 letters her aunt wrote, Ginny sets off across Europe. Staying with Peg's contacts or in hostels, Ginny begins to peel away some of the mythic layers surrounding her aunt, even as she falls into thrilling escapades and a blossoming romance. Johnson's plot stretches plausibility. Would Ginny's practical mother really have agreed to such a solo, undefined journey? But readers will probably overlook any improbabilities and willingly accompany Ginny through her sensitive, authentically portrayed experiences--uncomfortable, lonely, giddy, and life changing--as she pieces together family mysteries and discovers herself. Gillian Engberg Copyright Â© American Library Association. All rights reserved About the Author Maureen Johnson is the bestselling author of several novels, including 13 Little Blue Envelopes, the Truly Devious series, the Suite Scarlett series, and the Shades of London series. She has also written collaborative works such as Let It Snow with John Green and Lauren Myracle and The Bane Chronicles with Cassandra Clare and Sarah Rees Brennan. Maureen lives in New York and online on Twitter @maureenjohnson or at www.maureenjohnsonbooks.com.Â