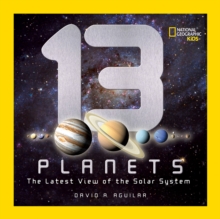 by: Aguilar, David A.
Format: Hardcover

Product Description First, Pluto left. Then it came back, along with Ceres and Eris...and now Haumea and MakeMake, too! The recent actions of the International Astronomical Union have put every solar system book out of date. In response, National Geographic joins forces with David Aguilar of the Harvard Smithsonian Astronomical Observatory to revise our 2008 book-and to update young readers on the high-interest topic of space. Using simple text and spectacular photorealistic computer art by the author, this book profiles all 13 planets in their newly created categories-plus the sun, the Oort Cloud, comets, and other worlds being discovered. Back-of-the-book activities offer hands-on fun for budding astronomers. About the Author David A. AguilarÂ is the author and illustrator of several books from National Geographic. His 13 Planets: The Latest View of the Solar System received the Eureka! Nonfiction Children's Book Gold Award from the California Reading Association. His writings are widely recognized for their ability to communicate the wonderment of science to enthusiasts of all ages. He is the originator of the Science Discovery program at the University of Colorado, Boulder; the popular host of the Harvard-Smithsonian Center for Astrophysics Observatory Nights program; and the past director of the Fiske Planetarium. Excerpt. Â© Reprinted by permission. All rights reserved. Once upon a time, long ago and far away, there were precisely seven planets: Moon, Mercury, Venus, Sun, Mars, Jupiter, and Saturn, all apparently revolving around a solidly fixed Earth. And then about five centuries ago came Nicholas Copernicus, who invented the solar system. He said the Sun was really in the middle surrounded by six planets: Mercury, Venus, Earth (with Moon), Mars, Jupiter, and Saturn. It was truly the Sunâ€™s system, with Earth now a spinning planet. It was all very simple and elegant. Â  Three centuries after Copernicus, things were no longer so simple. In 1781 another big planet, Uranus, was found, and then a lot of small ones were given names like Ceres, Astraea, Flora, Hygeia, and Kalliope. In 1846, still another big planet, Neptune, gained planetary status. By 1854 there were 41 planets, and astronomers cried â€œEnough!â€ So they all decided there were eight large planets, and the little guys werenâ€™t really planets but minor planets. Â  Today astronomers know that the solar system is much more complex and interesting than anyone dreamed of in the 1850s. There are more than 130 natural satellites, and more are being discovered. One, Saturnâ€™s Titan, is bigger than the planet Mercury. If Titan and our moon had independent orbits, they would qualify as planets. Astronomers now have orbits for nearly 500,000 minor planets, half of which have been assigned numbers, and about 15,000 of which have been given names. Almost all of them are irregularly-shaped rocks, but at least one, Ceres, is massive enough for its gravity to pull it into a sphere, so it is a dwarf planet. And there are the comets, hoards of them in the deep freeze beyond Neptune. Â  Occasionally some of these huge chunks of dirty ice get nudged into the inner parts of the solar system, where they thaw out and sprout long, beautiful tails. And a few of these ice balls are massive enough to pull themselves into spherical dwarf planets. Pluto is one of these, smaller than our moon. Makemake and Haumea are still smaller, while Eris is a little larger than Pluto. Three of these even have their own satellites. Undoubtedly more of these icy dwarf planets await discovery. Â  For now, there are eight classical planets and five dwarf planets, making thirteen! Â  --Dr. Owen Gingerich, Former Research Professor of Astronomy, Harvard and Astronomer Emeritus, Smithsonian Astronomical Observatory