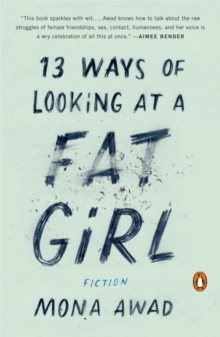 13 WAYS OF LOOKING AT A FAT GIRL: FICTION

Product Description â€œStunning...As you watch Lizzie navigate fraught relationships â€” with food, men, girlfriends, her parents and even with herself â€” youâ€™ll want to grab a friend and say: â€˜Whoa. This. Exactly.â€™â€Â â€”Washington Post "A hilarious, heartbreaking book."Â â€”PeopleNamed one of the best books of the year by NPR, The Atlantic,Â Time Out New York, and The Globe and Mail Growing up in the suburban hell of Misery Saga (a.k.a. Mississauga), Lizzie has never liked the way she looksâ€”even though her best friend Mel says sheâ€™s the pretty one. She starts dating guys online, but sheâ€™s afraid to send pictures, even when her skinny friend China does her makeup: she knows no one would want her if they could really see her. So she starts to lose. With punishing drive, she counts almonds consumed, miles logged, pounds dropped. She fights her way into coveted dresses. She grows up and gets thin, navigating double-edged validation from her mother, her friends, her husband, her reflection in the mirror. But no matter how much she loses, will she ever see herself as anything other than a fat girl? Â  In her brilliant, hilarious, and at times shocking debut, Mona Awad simultaneously skewers the body image-obsessed culture that tells women they have no value outside their physical appearance, and delivers a tender and moving depiction of a lovably difficult young woman whose life is hijacked by her struggle to conform. As caustically funny as it is heartbreaking, 13 Ways of Looking at a Fat Girl introduces a vital new voice in fiction. WINNER OF THE AMAZON CANADA FIRST NOVEL AWARD FINALIST FOR THE SCOTIABANK GILLER PRIZE FINALIST FOR THE COLORADO BOOK AWARD FOR LITERARY FICTION LONGLISTED FOR THE DUBLIN LITERARY AWARD ARAB AMERICAN BOOK AWARD HONORABLE MENTION FOR FICTION NAMED ONE OF THE MOST ANTICIPATED BOOKS OF 2016 BY ELLE, BUSTLE, AND THE GLOBE AND MAIL NAMED ONE OF THE BEST BOOKS OF THE MONTH BY THE HUFFINGTON POST, BUSTLE AND BOOKRIOT From School Library Journal A shockingly accurate portrayal of fat culture and female body shaming, this brief novel comprised of 13 short stories is like a grittier Bridget Jones's Diary mashed with Andrew Smith's Grasshopper Jungle. Lizzie obsesses over her weight. She believes that her thighs are too big and that no one could love her, and so she willingly allows her friends and boyfriends to control her. Lizzie is into online dating until the older man she meets wants a full-body shot, and she always takes what she can get when it comes to romance. When she finds a good man, she loses weight to keep him (even though he doesn't care about her appearance) and changes her name, but her self-esteem doesn't improve. The truths revealed in this work make it a difficult read, but most teens will identify with Lizzie in at least one of these tales. Some were previously published, but Awad has arranged them artfully to create a thought-provoking account of a young woman growing awkwardly into late adulthood. VERDICT A brash, realistic, and much needed look at body culture and self-esteem. Pair this with Isabel Quintero's Gabi, a Girl in Pieces.â€”Sarah Hill, Lake Land College, Mattoon, IL Review "Honest, searing, and necessary."Â  â€”Elle â€œSimultaneously tart and tender,Â  13 Ways of Looking at a Fat GirlÂ is stunning...The way food and body image define Elizabethâ€™s life is depressing and sad. But the book is neither. There is so much humor here â€” much of it dark, but spot on, like Dolores in Wally Lambâ€™sÂ  Sheâ€™s Come UndoneÂ or Lena Dunham inÂ  Girls."Â  â€” Washington Post â€œHeartbreaking . . . [rife] with beauty and humor . . . As addictive as potato chips and as painful as the prospect of eating nothing but 4-ounce portions of steamed fish for the rest of your life.â€Â  â€”Chicago Tribune â€œGutting . . . Awad gets everything right and, throughout these interconnected stories, reveals how absurd our culture is about women and their bodies. Several sections had me in tears. . . . I highly recommend this one