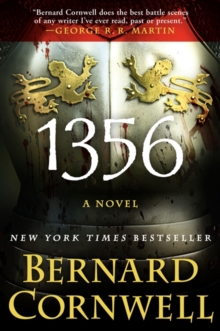 Product Description From New York Times bestselling author Bernard Cornwell, now available in paperbackâ€”aÂ thrilling tale of danger and conquest at the Battle of Poitiers,Â 1356Â is â€œa book in which Cornwellâ€™s gifts as scholar and storyteller come together spectacularly.â€ (Washington Post) Bernard Cornwell, the "master of martial fiction" (Booklist), brings Thomas of Hookton from the popular Grail Quest series into a new adventure in 1356, a thrilling stand-alone novel. On September 19, 1356, a heavily outnumbered English army faced off against the French in the historic Battle of Poitiers. In 1356, Cornwell resurrects this dramatic and bloody struggleâ€”one that would turn out to be the most decisive and improbable victory of the Hundred Yearsâ€™ War, a clash where the underdog English not only the captured the strategic site of Poitiers, but the French King John II as well. In the vein of Cornwellâ€™s bestselling Agincourt, 1356 is an action-packed story of danger and conquest, rich with military strategy and remarkable charactersâ€”both villainous and heroicâ€”transporting readers to the front lines of war while painting a vivid picture of courage, treachery, and combat. Review â€œThe first must-read of 2013 arrivesâ€¦.Bernard Cornwell is a master of combining a thumping good tale with a fascinating history lesson.â€ ( Reader's Digest) â€œIn addition to carving out another action-packed martial adventure, Cornwell spotlights one of the most significant but often overlooked battles of the era.â€ ( Booklist) â€œNo one picks a fight like Cornwell, who here does for the Battle of Poitiers what he did for the bloody fray that was Agincourt in the book of that name.â€ ( Library Journal) â€œA master of action-packed historical fictionâ€¦a vivid, exciting portrayal of medieval warfareâ€¦.Nobody writes battle scenes like Cornwell, accurately conveying the utter savagery of close combat with sword, ax, and mace, and the gruesome aftermath.â€ ( Publishers Weekly (starred review)) â€œBernard Cornwell does the best battle scenes of any writer Iâ€™ve ever read, past or present.â€ ( George R.R. Martin) â€œNobody in the world does this stuff better than Cornwell - action set six hundred years ago is as fresh and vital as six days ago, with rough, tough men at war, proving once again that nothing changes... least of all great storytelling.â€ ( Lee Child) â€œThe reigning king of historical fiction.â€ ( USA Today) â€œBernard Cornwell is a gifted and prolific historical novelist who seems at home in virtually every eraâ€¦.A lively, accessible account of a remote moment in European history, a book in which Cornwellâ€™s gifts as scholar and storyteller come together spectacularly.â€ ( Bill Sheehan, Washington Post) â€œTired of waiting for another of George R.R. Martinâ€™s Game of Thrones books? Cornwellâ€™s latest novel may be your best option.â€ ( Billy Heller, New York Post) â€œCornwell is one of the best writers of historical fiction.â€ ( McClatchy News) From the Back Cover "The most prolific and successful historical novelist in the world today" (Wall Street Journal) delivers another thrilling page-turner in this tale of peril and conquest at the Battle of Poitiers. September 1356, France: The English armyâ€”led by the heir to the throne, the Black Princeâ€”is set to invade, while the French, along with their Scottish allies, are ready to hunt their enemy down. But what if there was a weapon that could decide the outcome of the war? Thomas of Hookton, known as le Batard, has orders to uncover the lost sword of Saint Peter, a blade with mystical powers said to grant certain victory to whoever possesses her. The French seek the weapon, too, and so Thomas's quest will be thwarted at every turn by battle and betrayal, by promises made and oaths broken. Rich with colorful characters, great adventure, and vivid battle scenes, 1356 tells a magnificent story of the quest for a holy relic with the power to change historyâ€”a quest that culminates in an epic and unforgettable struggle. About th