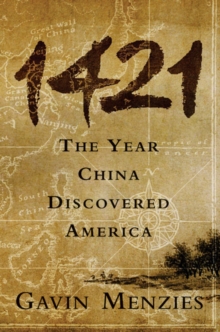 Product Description The incredible true story of the discovery of America before Columbus was even born.Gavin Menzies's extraordinary findings rewrite history. On March 8, 1421, the largest fleet the world had ever seen sailed from its base in China. The ships, huge junks nearly five hundred feet long and built from the finest teak, were under the command of Emperor Zhu Di's loyal eunuch admirals. Their mission was "to proceed all the way to the end of the earth to collect tribute from the barbarians beyond the seas" and unite the whole world in Confucian harmony. Their journey would last more than two years and circle the globe. When they returned in October 1423, the emperor had fallen, leaving China in political and economic chaos. The great ships, now considered frivolous, were left to rot at their moorings and the records of their journeys were destroyed. Lost in China's long, self-imposed isolation that followed was the knowledge that Chinese ships had reached America seventy years before Columbus and circumnavigated the globe a century before Magellan. Also concealed were how the Chinese colonized America before the Europeans and transplanted to America, Australia, New Zealand and South America the principal economic crops that have fed and clothed the world. Now, in a landmark historical journey, Gavin Menzies, who spent fifteen years tracing the astonishing voyages of the Chinese fleet, shares the remarkable account of his discoveries and the incontrovertible evidence to support them. His compelling narrative pulls together ancient maps, precise navigational knowledge, astronomy and the surviving accounts of Chinese explorers and the later European navigators to prove that the Chinese had also discovered Antarctica, reached Australia three hundred and fifty years before Cook and solved the problem of longitude three hundred years ahead of the Europeans. 1421 describes the artifacts and inscribed stones left behind by the emperor's fleet, the evidence of wrecked junks along its route -- discovered in locations ranging from the middle of the Mississippi River to tributaries of the Amazon -- and the ornate votive offerings left by the Chinese sailors wherever they landed, in honor of Shao Lin, goddess of the sea. 1421: The Year China Discovered America is the story of a remarkable journey of discovery that rewrites our understanding of history. Our knowledge of world exploration as it has been commonly accepted for centuries must now be reconceived due to this classic work of historical detection. From Publishers Weekly A former submarine commander in Britain's Royal Navy, Menzies must enjoy doing battle. The amateur historian's lightly footnoted, heavily speculative re-creation of little-known voyages made by Chinese ships in the early 1400s goes far beyond what most experts in and outside of China are willing to assert and will surely set tongues wagging. According to Menzies's brazen but dull account of the Middle Kingdom's exploits at sea, Magellan, Dias, da Gama, Cabral and Cook only "discovered" lands the Chinese had already visited, and they sailed with maps drawn from Chinese charts. Menzies alleges that the Chinese not only discovered America, but also established colonies here long before Columbus set out to sea. Because China burned the records of its historic expeditions led by Zheng He, the famed eunuch admiral and the focus of this account, Menzies is forced to defend his argument by compiling a tedious package of circumstantial evidence that ranges from reasonable to ridiculous. While the book does contain some compelling claims-for example, that the Chinese were able to calculate longitude long before Western explorers-drawn from Menzies's experiences at sea, his overall credibility is undermined by dubious research methods. In just one instance, when confounded by the derivation of cryptic words on a Venetian map, Menzies first consults an expert at crossword puzzles rather than an etymologist.