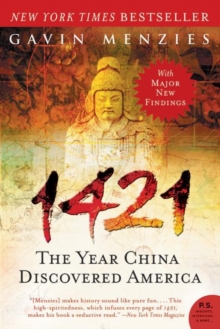 Product Description On March 8, 1421, the largest fleet the world had ever seen set sail from China to "proceed all the way to the ends of the earth to collect tribute from the barbarians beyond the seas." When the fleet returned home in October 1423, the emperor had fallen, leaving China in political and economic chaos. The great ships were left to rot at their moorings and the records of their journeys were destroyed. Lost in the long, self-imposed isolation that followed was the knowledge that Chinese ships had reached America seventy years before Columbus and had circumnavigated the globe a century before Magellan. And they colonized America before the Europeans, transplanting the principal economic crops that have since fed and clothed the world. Review â€œMenziesâ€™ enthusiasm is infectious and his energy boundless. He has raised important questions and marshaled some fascinating information.â€ (Toronto Globe and Mail) â€œCaptivating . . . a historical detective story . . . that adds to our knowledge of the world, past and present.â€ (Daily News) â€œ is likely to be the most fascinating read of 2003.â€ (UPI) â€œNo matter what you think of Menziesâ€™s theories, his enthusiasm is infectious.â€ (Christian Science Monitor) â€œWhat youâ€™ve done, brilliantly, is to raise many questions that people are debating.â€ (Diane Rehm, The Diane Rehm Show) â€œ[Menzies] makes history sound like pure fun...a seductive read.â€ (New York Times Magazine) About the Author Gavin Menzies (1937-2020) was the bestselling author of 1421: The Year China Discovered America; 1434: The Year a Magnificent Chinese Fleet Sailed to Italy and Ignited the Renaissance; and The Lost Empire of Atlantis: History's Greatest Mystery Revealed. He served in the Royal Navy between 1953 and 1970. His knowledge of seafaring and navigation sparked his interest in the epic voyages of Chinese admiral Zheng He.Â