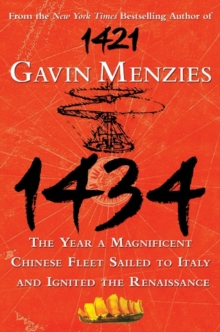 1434: THE YEAR A MAGNIFICENT CHINESE FLEET SAILED TO ITALY AND IGNITED THE RENAISSANCE

Product Description The New York Times bestselling author of 1421 offers another stunning reappraisal of history, presenting compelling new evidence that traces the roots of the European Renaissance to Chinese exploration in the fifteenth century The brilliance of the Renaissance laid the foundation of the modern world. Textbooks tell us that it came about as a result of a rediscovery of the ideas and ideals of classical Greece and Rome. But now bestselling historian Gavin Menzies makes the startling argument that in the year 1434, Chinaâ€”then the world's most technologically advanced civilizationâ€”provided the spark that set the European Renaissance ablaze. From that date onward, Europeans embraced Chinese intellectual ideas, discoveries, and inventions, all of which form the basis of western civilization today. Florence and Venice of the early fifteenth century were hubs of world trade, attracting traders from across the globe. Based on years of research, this marvelous history argues that a Chinese fleetâ€”official ambassadors of the emperorâ€”arrived in Tuscany in 1434, where they were received by Pope Eugenius IV in Florence. The delegation presented the influential pope with a wealth of Chinese learning from a diverse range of fields: art, geography (including world maps that were passed on to Christopher Columbus and Ferdinand Magellan), astronomy, mathematics, printing, architecture, steel manufacturing, military weaponry, and more. This vast treasure trove of knowledge spread across Europe, igniting the legendary inventiveness of the Renaissance, including the work of such geniuses as da Vinci, Copernicus, Galileo, and more. In 1434, Gavin Menzies combines this long-overdue historical reexamination with the excitement of an investigative adventure. He brings the reader aboard the remarkable Chinese fleet as it sails from China to Cairo and Florence, and then back across the world. Erudite and brilliantly reasoned, 1434 will change the way we see ourselves, our history, and our world. From Publishers Weekly In Menzies's 1421, the amateur historian advanced a highly controversial hypothesis, that the Chinese discovered America; in this follow-up, he credits the Renaissance not to classical Greek and Roman ideals (a "Eurocentric view of history") but again to the Chinese. His thesis in both works is based on the seven (historically undisputed) voyages undertaken by a large Chinese sailing fleet between 1405 and 1433; while it is known that they traveled as far as east Africa, Menzies believes that they landed in Italy and sent a delegation to the Council of Venice, held in Florence in 1439. There, they provided the knowledge and technique-introducing the painter Alberti, for instance, to the methods of perspective drawing-that sparked the Renaissance. Menzies sets the stage by recapitulating arguments from his first book, including the ingenious method for calculating longitude that Chinese navigators may have used. Though Menzies writes engagingly, his assumption that the Chinese fleet landed a delegation in Florence is highly speculative, and hardly substantiated by any facts (Alberti could just have easily learned perspective from classical sources; the Greeks knew about the relationship between perception of length and distance in the 1st Century BCE). Copyright Â© Reed Business Information, a division of Reed Elsevier Inc. All rights reserved. From Booklist In his earlier book, 1421: The Year China Discovered America (2002), Menzies, a former British Royal Navy submarine commander, asserted that a mighty Chinese fleet commanded by the eunuch Zheng visited North America. The book generated considerable interest and a cult following among laymen, but professional historians in both China and the West largely dismissed his claims. Now Menzies, still the provocateur, insists that a Chinese fleet visited Italy and imparted the wisdom of the highly advanced Chinese civilization, thus sparking the explosion of scienti