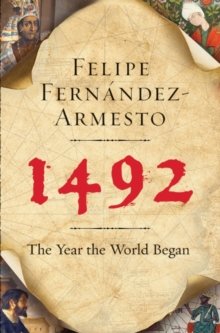 Product Description 1492: The Year the World Began is a look at one of the most fascinating years in world history, the year when many believe the modern world was born. Historian Felipe Fernandez-Armesto, author of Millennium, covers such iconic figures as Christopher Columbus and Alexander Borgia and explores cultures as diverse as that of Spain, China, and Africa to tell the story of 1492, a momentous year whose lessons are still relevant today From Booklist Surveying the planet entire in 1492, FernÃ¡ndez-Armesto selects a regional event (frequently the death of a ruler) and elaborates its significance in the redirection of historyâ€™s flow from a humanity sundered into separate civilizations on several continents, toward a humanity somehow sutured together. Enduring cultural boundaries, such as the western Mediterranean line between Christianity and Islam or the east European marches between Catholicism and Orthodoxy, coalesced around that time, as did Islamâ€™s reach into western Africa. Recounting them, FernÃ¡ndez-Armesto displays the popular talent he has demonstrated in previous works (Amerigo: The Man Who Gave His Name to America, 2007); his narrative fluidity, not to mention an ability to turn a phrase, converts facts into context in an attractively readable manner. His Columbus is not the explorer per se but the social climber pursuing feudal success, and the voyage of 1492 is more an iteration of ongoing Spanish maritime ventures, such as the colonization of the Canary Islands, than something wholly new. From the Aztecs to Chinese admiral Zheng He, FernÃ¡ndez-Armesto brilliantly sweeps a startling breadth of history into his unified narrative. --Gilbert Taylor Review â€œIn this admirable history, FernÃ¡ndez-Armesto has written a book of travels not unlike those of Marco Polo, filled with marvels and sensations, rich in description and replete with anecdote. 1492 is a compendium of delights.â€ (The Times (London)) In his stimulating new book, Fernandez-Armesto offers a model of how to write popular history: accessible, provocative and full of telling detail. (4 stars) (Mail on Sunday (London)) â€œFernandez-Armestoâ€™s narrative fluidity, not to mention an ability to turn a phrase, converts facts into context in an attractively readable manner.... Surveying the planet entire in 1492, FernÃ¡ndez-Armesto brilliantly sweeps a startling breadth of history into his unified narrative.â€ ( Booklist) â€œFernÃ¡ndez-Armesto challenges some long-standing historical thinkingâ€¦. The compiled information adds immensely to the understanding of world that ended and began in 1492â€¦. 1492 changes our view of history.â€ (San Antonio Express-News) From the Back Cover The world would end in 1492â€”so the prophets, soothsayers, and stargazers said. They were right. Their world did end. Ours began. In this extraordinary, sweeping history, Felipe FernÃ¡ndez-Armesto traces key elements of the modern world back to that single, fateful year. Everything changed in 1492: the way power and wealth were distributed around the globe, the way major religions and civilizations divided the world, and the increasing interconnectedness of separate economies that we now call globalization. Events that began in 1492 transformed the whole ecological system of the planet. Our individualism and the very sense we share of inhabiting one world, as partakers in a common humanity, took shape and became visible in 1492. In search of the origins of modernity, 1492 takes readers on a journey around the globe of the time, in the company of real-life travelers, drawing together the threads that came to bind the planet. The tour starts in Granada, where the last Islamic kingdom in Europe collapsed, then moves to Timbuktu, where a new Muslim empire triumphed. With Portuguese explorers, we visit the court of the first Christian king in the southern hemisphere. We join Jews expelled from Spain as they cross the Mediterranean to North Africa, Italy, and Istanbul. We see the flowe