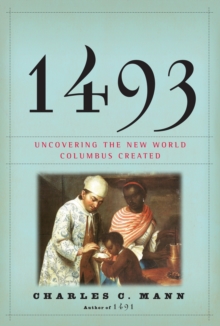 Product Description From the author of 1491â€”the best-selling study of the pre-Columbian Americasâ€”a deeply engaging new history of the most momentous biological event since the death of the dinosaurs. More than 200 million years ago, geological forces split apart the continents. Isolated from each other, the two halves of the world developed radically different suites of plants and animals. When Christopher Columbus set foot in the Americas, he ended that separation at a stroke. Driven by the economic goal of establishing trade with China, he accidentally set off an ecological convulsion as European vessels carried thousands of species to new homes across the oceans. The Columbian Exchange, as researchers call it, is the reason there are tomatoes in Italy, oranges in Florida, chocolates in Switzerland, and chili peppers in Thailand. More important, creatures the colonists knew nothing about hitched along for the ride. Earthworms, mosquitoes, and cockroaches; honeybees, dandelions, and African grasses; bacteria, fungi, and viruses; rats of every descriptionâ€”all of them rushed like eager tourists into lands that had never seen their like before, changing lives and landscapes across the planet. Eight decades after Columbus, a Spaniard named Legazpi succeeded where Columbus had failed. He sailed west to establish continual trade with China, then the richest, most powerful country in the world. In Manila, a city Legazpi founded, silver from the Americas, mined by African and Indian slaves, was sold to Asians in return for silk for Europeans. It was the first time that goods and people from every corner of the globe were connected in a single worldwide exchange. Much as Columbus created a new world biologically, Legazpi and the Spanish empire he served created a new world economically. As Charles C. Mann shows, the Columbian Exchange underlies much of subsequent human history. Presenting the latest research by ecologists, anthropologists, archaeologists, and historians, Mann shows how the creation of this worldwide network of ecological and economic exchange fostered the rise of Europe, devastated imperial China, convulsed Africa, and for two centuries made Mexico Cityâ€”where Asia, Europe, and the new frontier of the Americas dynamically interactedâ€”the center of the world. In such encounters, he uncovers the germ of todayâ€™s fiercest political disputes, from immigration to trade policy to culture wars. In 1493, Charles Mann gives us an eye-opening scientific interpretation of our past, unequaled in its authority and fascination. Amazon.com Review Guest Reviewer: Nathaniel Philbrick on 1493 by Charles C. Mann Nathaniel Philbrick is the author of the New York Times bestsellers The Last Stand ; In the Heart of the Sea , which won the National Book Award; Sea of Glory , winner of the Theodore and Franklin D. Roosevelt Naval History Prize; and Mayflower , which was a finalist for the Pulitzer Prize in history and one of the New York Times' ten best books of the year. He has lived on Nantucket since 1986. Iâ€™m a big fan of Charles Mannâ€™s previous book 1491, in which he provides a sweeping and provocative examination of North and South America prior to the arrival of Christopher Columbus. Itâ€™s exhaustively researched but so wonderfully written that itâ€™s anything but exhausting to read. With his follow-up, 1493, Mann has taken it to a new, truly global level. Building on the groundbreaking work of Alfred Crosby (author of The Columbian Exchange and, Iâ€™m proud to say, a fellow Nantucketer), Mann has written nothing less than the story of our world: how a planet of what were once several autonomous continents is quickly becoming a single, â€œglobalizedâ€ entity. Mann not only talked to countless scientists and researchers; he visited the places he writes about, and as a consequence, the book has a marvelously wide-ranging yet personal feel as we follow Mann from one far-flung corner of the world to the next. And always, the