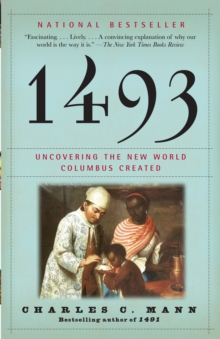 Product Description A deeply engaging new history of how European settlements in the post-Colombian Americas shaped the world, from the bestselling author of 1491. Presenting the latest research by biologists, anthropologists, archaeologists, and historians, Mann shows how the post-Columbian network of ecological and economic exchange fostered the rise of Europe, devastated imperial China, convulsed Africa, and for two centuries made Mexico Cityâ€”where Asia, Europe, and the new frontier of the Americas dynamically interactedâ€”the center of the world. In this history, Mann uncovers the germ of today's fiercest political disputes, from immigration to trade policy to culture wars. In 1493, Mann has again given readers an eye-opening scientific interpretation of our past, unequaled in its authority and fascination. Review A New York Times Notable Book A TIME Magazine Best Book of the Year A Washington Post Notable Book"Fascinating. . . . Lively. . . . A convincing explanation of why our world is the way it is." â€”The New York Times Book ReviewÂ "Even the wisest readers will find many surprises here. . . . Like 1491, Mann's sequel will change worldviews." â€”San Francisco ChronicleÂ Â "Exemplary in its union of meaningful fact with good storytelling, 1493 ranges across continents and centuries to explain how the world we inhabit came to be." â€”The Washington Post Â â€œEngaging . . . Mann deftly illuminates contradictions on a human scale: the blind violence and terror at Jamestown, the cruel exploitation of labor in the silver mines of Bolivia, the awe felt by Europeans upon first seeing a rubber ball bounce.â€ â€”The New Yorker â€œRevelatory.â€ â€”Lev Grossman, Time MagazineÂ â€œCompelling and eye-opening.â€ â€”Publishers Weekly Top 100 Books of 2011Â â€œA book to celebrate. . . A bracingly persuasive counternarrative to the prevailing mythology about the historical significance of the â€˜discoveryâ€™ of America. . . 1493 is rich in detail, analytically expansive and impossible to summarize. . . [Mannâ€™s book] deserves a prominent place among that very rare class of books that can make a difference in how we see the world, although it is neither a polemic nor a work of advocacy. Thoughtful, learned and respectful of its subject matter, 1493 is a splendid achievement.â€ â€”The OregonianÂ â€œDespite his scope, Mann remains grounded in fascinating details. . . . Such technical insights enhance a very human story, told in lively and accessible prose.â€ â€”Cleveland Plain-DealerÂ â€œMannâ€™s excitement never flags as he tells his breathtaking story. . . There is grandeur in this view of the past that looks afresh at the different parts of the world and the parts each played in shaping it.â€ â€”Financial TimesÂ â€œA muscular, densely documented follow-up [to Mannâ€™s 1491]. . . Like its predecessor, 1493 runs to more than 400 pages, but it moves at a gallop. . . As a historian Mann should be admired not just for his broad scope and restless intelligence but for his biological sensitivity. At every point of his tale he keeps foremost in his mind the effect of humansâ€™ activities on the broader environment they inhabit.â€ â€”The Wall Street JournalÂ â€œEvenhandedness, a sense of wonder, the gift of turning a phrase. . . Mann loves the world and adopts it as his own.â€â€”ScienceÂ â€œCharles C. Mann glories in reality, immersing his reader in complexity. . . . The worn clichÃ©s crumble as readers gain introductions to the freshest of the systems of analysis gendered in the first post-Columbian millennium.â€ â€”Alfred W. Crosby, author of The Columbian ExchangeÂ â€œIn the wake of his groundbreaking book 1491 Charles Mann has once again produced a brilliant and riveting work that will forever change the way we see the world. Mann shows how the ecological collision of Europe and the Americas transformed virtually every aspect of human history. Beautifully written, and packed with startling research, 1493 is a monumental achievement." â€”David Grann, author of The Lost City of ZÂ â€œ[1493] is readable and well-written