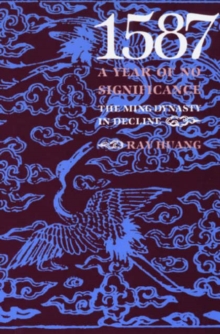 1587, A YEAR OF NO SIGNIFICANCE: THE MING DYNASTY IN DECLINE

Product Description Winner of the American Book Award for HistoryÂ  Â  "If you buy only one work on pre-modern Chinese history this year, make it this one."â€”W. S. Atwell, History In 1587, the Year of the Pig, nothing very special happened in China. Yet in the seemingly unspectacular events of this ordinary year, Ray Huang finds exemplified the roots of China's perennial inability to adapt to change. Through fascinating accounts of the lives of seven prominent officials, he fashions a remarkably vivid portrayal of the court and the ruling class of late imperial China. In revealing the subtle but inexorable forces that brought about the paralysis and final collapse of the Ming dynasty, Huang offers the reader perspective into the problems China has faced through the centuries. Review "Unusual and thoughtful. . . . Takes the poetâ€™s or the novelistâ€™s joy in turning a commonplace detail to the angle at which it reveals its glint of meaning."?David Lattimore, New York Times Book Review "This is a superb book, one that answers many questions about the Chinese, past and present."?Srully Blotnick, Forbes Magazine "1587, A Year of No Significance, for all its scholarship, has the surreal visionary quality of Kafkaâ€™s beautiful and frustrating story 'The Great Wall of China.'"â€”John Updike, The New Yorker "Huang uses 1587 as a convenient focus for his study of late Ming developments through the lives of the Wan-li emperor, two of his grand secretaries, a famous official, a leading general, and one of the dynasty's most celebrated iconoclasts. Not all specialists may agree with Huang's conclusion that by 1587 the limit for the Ming dynasty had already been reached and the year stands as a 'chronicle of failure,' but there will be widespread agreement on the book's impressive achievement in providing vivid biographical and institutional detail within a highly readable text."? Library Journal "If you buy only one work on pre-modern Chinese history this year, make it this one. . . . The author displays great sensitivity in dealing with the tensions and contradictions in late Ming society, and even when one disagrees with his interpretation of certain facts or events, one cannot help but be impressed by the depth of his knowledge and his enviable ability to bring the characters in his story to life. In places, for example, his description of what it was like to be the Wan-li emperor is nothing short of masterly. . . . Will become required reading for anyone interested in this period of Chinese history."â€”W. S. Atwell, History "1587 is immensely rich historical fare that provides great insight into the workings of the late Ming administration. . . . Huang's sensitive and well-informed descriptions of administrative life organized in a bold and readable way make [this] book more significant that the year was. It is essential reading for an understanding of late imperial China."?Tom Fisher, Journal of Oriental Studies "Huang shows a mastery of the intricate details of the ritualistic and practical sides of Ming court politics, and an ability to make them comprehensible. His story is cleverly constructed and deliberately paradoxical. If 1587 is, in the long run, a â€˜year of no significance,â€™ it is nevertheless full of incident, and each incident carries promise of future drama."?Jonathan Spence, New York Review of Books "A distinguished scholar has written a remarkable description of political style in the final decades of the Ming dynasty and placed in perspective the mixed motives of its major characters. . . . No other book presents as vividly the atmosphere of traditional Chinese government."â€”John Meskill, Asia "A profoundly helpful book in our understanding of the Chinese tradition."?Eric Widmer, Brown University, The History Book Club Review "[An] impressive achievement in providing vivid biographical and institutional detail withinÂ a highly readable text."? Focus on Asian Studies "Huang succeeds a