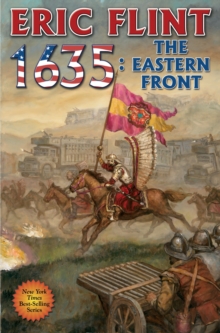 Product Description The New Novel in the New York Times Best-Selling Series. Eric Flint, the Reigning Master of Alternate History, Returns to the Series He Created in 1632 for the Most Exciting Entry Yet in the Ring of Fire Saga. Â Â Â Â Â Â Â Â Â Â Â  The Thirty Years War continues to ravage 17th century Europe, but a new force is gathering power and influence: the United States of Europe, a new nation led by Gustavus Adolphus, King of Sweden, and the West Virginians from the 20th century led by Mike Stearns who were hurled centuries into the past by a mysterious cosmic accident. Â Â Â Â Â  While the old entrenched rulers and manipulators continue to plot against this new upstart nation, everyday life goes on in Grantville, even under the shadow of war, as this lost outpost of American freedom and justice must play David against a 17th century Goliath of oppressive feudalism. Â  Praise for the New York Times Best-Selling Series: â€œ. . . gripping and expertly detailed . . . a treat for lovers of action-SF or alternate history . . . battle scenes depicted with power . . . distinguishes Flint as an SF author of particular note, one who can entertain and edify in equal, and major, measure.â€ â€” Publishers Weekly (in a starred review) Â  â€œ[This] alternate-history saga . . . is certainly a landmark in that subgenre. . . . A splendid example of character-centered alternate-history, this is a must read for its series' growing fandom.â€ â€” Booklist (Starred Review) Â  â€œ. . . takes historic speculation to a new level in a tale that combines accurate historical research with bold leaps of the imagination. Fans of alternate history and military sf should enjoy this rousing tale of adventure and intrigue.â€ â€” Library Journal Â  â€œThis alternate history series is already one of the best around and each new entry appears better than the previous one, a seemingly impossible feat . . . terrific. . . .â€ â€” The Midwest Book Review About the Author Eric Flint is the author/creator of the New York Times best-selling Ring of Fire series, the most popular alternate history series today. With David Drake he has written six popular novels in the Belisarius series, and with David Weber collaborated on 1633, and 1634: The Baltic War, two novels in the Ring of Fire series, and on Crown of Slaves, a best of the year pick by Publishers Weekly, and its sequel, Torch of Freedom. Flint received his masters degree in history from UCLA and was for many years a labor union activist. He lives in East Chicago , IL , with his wife and is working on more books in the best-selling Ring of Fire series.