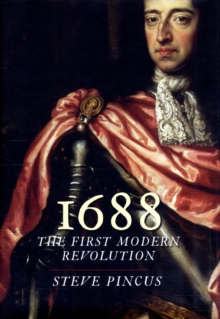 1688: THE FIRST MODERN REVOLUTION (THE LEWIS WALPOLE SERIES IN EIGHTEENTH-CENTURY CULTURE AND HISTORY)

Product Description For two hundred years historians have viewed Englandâ€™s Glorious Revolution of 1688â€“1689 as an un-revolutionary revolutionâ€”bloodless, consensual, aristocratic, and above all, sensible. In this brilliant new interpretation Steve Pincus refutes this traditional view. By expanding the interpretive lens to include a broader geographical and chronological frame, Pincus demonstrates that Englandâ€™s revolution was a European event, that it took place over a number of years, not months, and that it had repercussions in India, North America, the West Indies, and throughout continental Europe. His rich historical narrative, based on masses of new archival research, traces the transformation of English foreign policy, religious culture, and political economy that, he argues, was the intended consequence of the revolutionaries of 1688â€“1689. James II developed a modernization program that emphasized centralized control, repression of dissidents, and territorial empire. The revolutionaries, by contrast, took advantage of the new economic possibilities to create a bureaucratic but participatory state. The postrevolutionary English state emphasized its ideological break with the past and envisioned itself as continuing to evolve. All of this, argues Pincus, makes the Glorious Revolutionâ€”not the French Revolutionâ€”the first truly modern revolution. This wide-ranging book reenvisions the nature of the Glorious Revolution and of revolutions in general, the causes and consequences of commercialization, the nature of liberalism, and ultimately the origins and contours of modernity itself. Review "[A]n important, fresh, and imaginative work of scholarship. . . . It will have recast the origins of modern England as well as the history of the revolution of 1688."â€”Bernard Bailyn, New York Review of Books (Bernard Bailyn New York Review of Books) â€œMr. Pincusâ€™s cogently argued account of what really happened during Englandâ€™s revolution destroys many comforting notions that have prevailed for more than 200 yearsâ€¦. It leaves the reader with something much more exciting: a new understanding of the origins of the modern, liberal state.â€-- Economist ( Economist 2009-10-17) "Utterly extraordinary."â€”Don Herzog, University of Michigan (Don Herzog) â€œWe all know that the year 1688 is a milestone in England's history; now, thanks to Steve Pincus, the book 1688 will be a milestone in its historiography.Â  Pincus transforms what once seemed a peaceful compromise among agreeable aristocrats into a fractious and all-encompassing crisis, the â€˜first modern revolution.â€™ Provocative, erudite, and accessible, 1688 is a must read for anyone interested in seventeenth-century Europe and its possessions.â€â€”Cynthia Herrup, University of Southern California (Cynthia Herrup) "In this remarkable work of scholarship, vast in scope and profound in its implications, Pincus challenges Macaulay and the orthodox view that the Glorious Revolution was moderate, peaceful, and conservative, and reveals a violent transformational event that revolutionized England's state, church, and political economy, and introduced political modernity."â€”Bernard Bailyn, Harvard University (Bernard Bailyn) "A radical interpretation of a radical revolution.Â  Steve Pincus's brilliantly researched account of the extraordinary events of the 1680s and 1690s mounts an insuperable challenge to the comfortable view that the Glorious Revolution was another instance of British consensus politics, pragmatism, and common sense.Â  1688 recaptures the revolutionary nature of the Glorious Revolution and its far-reaching and interconnected conflicts over foreign policy, political economy, religion, and the nature of the modern state."â€”John Brewer, California Institute of Technology (John Brewer) â€œA magnificent, fully documented, very well written study of how the first thorough-going modern revolution was achieved with effort and against substantial obstacles over several