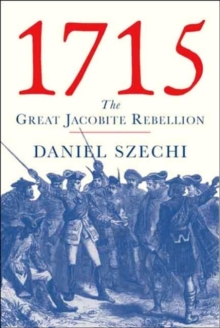 Lacking the romantic imagery of the 1745 uprising of supporters of Bonnie Prince Charlie, the Jacobite rebellion of 1715 has received far less attention from scholars. Yet the â€™15, just eight years after the union of England and Scotland, was in fact a more significant threat to the British state. This book is the first thorough account of the Jacobite rebellion that might have killed the Act of Union in its infancy.
Â
Drawing on a substantial range of fresh primary resources in England, Scotland, and France, Daniel Szechi analyzes not only large and dramatic moments of the rebellion but also the smaller risings that took place throughout Scotland and northern England. He examines the complex reasons that led some men to rebel and others to stay at home, and he reappraises the economic, religious, social, and political circumstances that precipitated a Jacobite rising. Shedding new light on the inner world of the Jacobites, Szechi reveals the surprising significance of their widely supported but ultimately doomed rebellion.