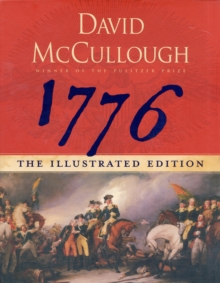 Product Description With a new introduction by David McCullough, 1776: The Illustrated Edition brings 140 powerful images and thirty-seven removable replicas of source documents to this remarkable drama. In 1776, David McCulloughâ€™s bestselling account of a pivotal year in our nationâ€™s struggle, readers learned of the greatest defeats, providential fortune, and courageous triumphs of George Washington and his bedraggled army. Now, in 1776: The Illustrated Edition, the efforts of the Continental Army are made even more personal, as an excerpted version of the original book is paired with letters, maps, and seminal artwork. More than three dozen source documentsâ€”including a personal letter George Washington penned to Martha about his commission, a note informing the mother of a Continental soldier that her son has been taken prisoner, and a petition signed by Loyalists pledging their allegiance to the Kingâ€”are re-created in uniquely designed envelopes throughout the book and secured with the congressional seal. Both a distinctive art book and a collectible archive, 1776: The Illustrated Edition combines a treasury of eighteenth-century paintings, sketches, documents, and maps with storytelling by our nationâ€™s preeminent historian to tell the story of 1776 as never before. Amazon.com Review : With apologies to local museums, it's hard to imagine an interactive look at the birth of American independence that exceeds 1776: The Illustrated Edition. Packed with striking replicas of letters, maps, and portraits, this updated version of David McCullough's 2005 bestseller provides readers with unedited first-hand accounts of America's initial steps toward sovereignty. Its engaging narrative blends beautifully with personal notes from iconic leaders and reveals the determination, bravery, and good ol' blind luck that founded our country. --Dave Callanan From Publishers Weekly Starred Review. This handsome new version of McCullough's blockbuster (2.6 million copies of the original edition in print) is a visual feast. The text is abridged, but McCullough illustrates his riveting account of the most important year in the war that made America with maps, portraits and reproductions of broadsides and newspaper ads. Many famous paintings are includedâ€” Washington Crossing the Delaware (which, McCullough notes, captures the drama of the moment, even though many of the details are inaccurate); Charles Wilson Peale's portraits of Alexander Hamilton and Gen. Nathanael Greene; John Singleton Copley's portrait of Mercy Otis Warren, who wrote an early history of the revolution. McCullough also introduces less well-known images, such as a satiric print poking fun at the British prime minister, Lord North. Scattered throughout are vellum envelopes that hold facsimile reproductions of 37 primary sourcesâ€”letters from George Washington to Martha, an ambrotype of Continental soldier Ralph Farnham as a centenarian, the text of a vow of allegiance to the king taken by Loyalists in New Jersey. By including these documents, McCullough has recreated not just the excitement of 1776, but the thrill of an archival research trip as well. From start to finish, this volume is a delight. (Oct.) Copyright Â© Reed Business Information, a division of Reed Elsevier Inc. All rights reserved. Review "This is a narrative tour de force, exhibiting all the hallmarks the author is known for: fascinating subject matter, expert research and detailed, graceful prose. ...Simply put, this is history writing at its best from one of its top practitioners." -- Publishers Weekly, Starred Review "A master story-teller's character driven account of a storied year in the American Revolution. A sterling account." -- Kirkus, Starred Review "...McCullough brilliantly captures the Spirit of '76 in Washington's miraculous victories at Trenton and Princeton. An altogether marvelous contribution that deserves to be read by every American." -- Library Journal About the Author