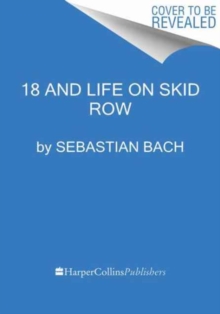 Product Description NPR Best Books of 2017 NOW IN GLORIOUS PAPERBACH AND FEATURING NEW PHOTOS 18 And Life on Skid Row tells the story of a boy who spent his childhood moving from Freeport, Bahamas to California and finally to Canada and who at the age of eight discovered the gift that would change his life. Throughout his career, Sebastian Bach has sold over twenty million records both as the lead singer of Skid Row and as a solo artist. He is particularly known for the hit singles I Remember You,Â Youth Gone Wild,Â &Â 18 & Life, and the albums Skid Row and Slave To The Grind, which became the first ever hard rock album to debut at #1 on the Billboard Top 200 and landed him on the cover of Rolling Stone magazine. Bach then went on to become the first rock star to grace the Broadway stage, with starring roles in Jekyll & Hyde, Jesus Christ Superstar and The Rocky Horror Picture Show. He also appeared for seven seasons on the hit television show The Gilmore Girls. In his memoir, Bach recounts lurid tales of excess and debauchery as he toured the world with Bon Jovi, Aerosmith, Motley Crue, Soundgarden, Pantera, Nine Inch Nails and Guns Nâ€™ Roses. Filled with backstage photos from his own personal collection, 18 And Life on Skid Row is the story of hitting it big at a young age, and of a band that broke up in its prime. It is the story of a man who achieved his wildest dreams, only to lose his family, and then his home. It is a story of perseverance, of wine, women and song and a man who has made his life on the road and always will. 18 And Life On Skid RowÂ is not your ordinary rock memoir, because Sebastian Bach is not your ordinary rock star. Review â€œIn the hedonistic new memoir 18 and Life on Skid Row, Sebastian Bach is brutally frank in his description of life on the road and exploits...Written in a funny, everyman style, 18 and Life finds Bach as one of rockâ€™s most affable frontmen.â€ (Rolling Stone) â€œThe soulfulness of Sebastian Bachâ€™s new memoir caught me off-guardâ€¦.The bookâ€™s personal stories are compellingâ€¦theyâ€™re what make 18 and Life on Skid Row a captivating read.â€ (LA Weekly) â€œ[a] ribald and freewheeling memoirâ€¦often a delightfully trashy and salacious read. The overall impression one gets of Bach is of an outgoing and genial personâ€¦it works because of Bachâ€™s puppyish enthusiasm-for music, yes, but also for booze, for drugs, and for sex in unusual places. Rock it up!â€ (AV Club) â€œa wild ride of a memoirâ€ (The Houston Press) â€œthe rock book thatâ€™s going to be hard to beatâ€ (Las Vegas Weekly) â€œgive the gift of Baz this holiday season and get the Skid Row scoop via one of rockâ€™s greatest frontmen.â€ (Vanyaland) From the Back Cover FROM SKID ROW TO BROADWAY, FROM THE GUTTERS OF NEW JERSEY TO SAVILE ROW, HEREIN LIES THE TALE OF THE FIRST THIRTY YEARS OF BACH â€™Nâ€™ ROLL, MOTHERTRUCKERS!!!!!! Sebastian Bach is the epitome of a rock â€™nâ€™ roll front man. Loud, boisterous, sometimes self-destructive, and constantly creative, he was the electrifying, iconic lead singer of Skid Rowâ€”the band whose platinum-selling songs â€œ18 and Life,â€ â€œYouth Gone Wild,â€ and â€œI Remember You,â€ took the world by storm, and were MTV mainstays. But Bach is no ordinary rock star. In his whip-smart, exhilarating, and brutally honest memoir, Bach tells his story of Skid Row: the parties, drugs, and international tours with MÃ¶tley CrÃ¼e, Aerosmith, Metallica, Slayer, and Guns Nâ€™ Roses, as well as the one-of-a-kind voice that carried him through Skid Rowâ€™s heyday and their eventual breakup. With typical Sebastian-esque scream and bravado, he reflects on the cost of fame, the price of creativity, and what it means to go from rock hopeful to rock star. From his birth in the Bahamas to his teenage years in Canada to the music that rocks his life today, 18 and Life on Skid Row is the ultimate story of Sebastian Bach and his devotion to the music he loves. About the Author Sebastian Bach has sold in excess of twenty million records worldwide as lead sing