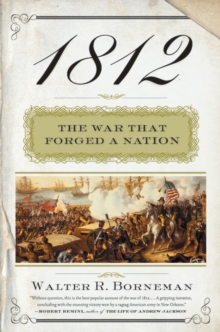 Product Description In June 1812 the still-infant United States had the audacity to declare war on the British Empire. Fought between creaking sailing ships and armies often led by bumbling generals, the ensuing conflict featured a tit-for-tat "You burned our capital, so we'll burn yours" and a legendary battle unknowingly fought after the signing of a peace treaty. During the course of the war, the young American navy proved its mettle as the USS Constitution, "Old Ironsides," sent two first-rate British frigates to the bottom, and a twenty-seven-year-old lieutenant named Oliver Hazard Perry hoisted a flag exhorting, "Don't Give Up the Ship," and chased the British from Lake Erie. By 1814, however, the United States was no longer fighting for free trade, sailors' rights, and as much of Canada as it could grab, but for its very existence as a nation. With Washington in flames, only a valiant defense at Fort McHenry saved Baltimore from a similar fate. Here are the stories of commanding generals such as America's Henry "Granny" Dearborn, double-dealing James Wilkinson, and feisty Andrew Jackson, as well as Great Britain's gallant Sir Isaac Brock, overly cautious Sir George Prevost, and Rear Admiral George Cockburn, the man who put the torch to Washington. Here too are those inadvertently caught up in the war, from heroine farm wife Laura Secord, whom some call Canada's Paul Revere, to country doctor William Beanes, whose capture set the stage for Francis Scott Key to write "The Star-Spangled Banner." 1812: The War That Forged a Nation presents a sweeping narrative that emphasizes the struggle's importance to America's coming-of-age as a nation. Though frequently overlooked between the American Revolution and the Civil War, the War of 1812 did indeed span half a continent -- from Mackinac Island to New Orleans, and Lake Champlain to Horseshoe Bend -- and it paved the way for the conquest of the other half. During the War of 1812, the United States cast aside its cloak of colonial adolescence and -- with both humiliating and glorious moments -- found the fire that was to forge a nation. From Publishers Weekly This thoroughly readable popular history of the War of 1812 may exaggerate in its claim that the war forged America?s national identity; after all, there were enough regional identities left lying around after the conflict to cause a national civil war. But otherwise it?s a fine narrative history that traces the major of events of the war, from the preliminary plots by James Wilkinson and Aaron Burr that revealed the ambitions of Westerners for territorial expansion, through New England?s secessionist Hartford Convention to the Battle of New Orleans, which wrapped up the war in 1815. Borneman makes clear that the performance of the American army was mostly disgraceful, that the Canadians can pat themselves on the back for courage and endurance and that the decisive victory of the American navy was not the famous frigate duels but the Battle of Lake Champlain in 1814. Borneman (Alaska: Saga of a Bold Land) is also strong in vivid personal portraits (the gigantic Winfield Scott and the diminutive and sickly James Madison) and evenhanded as far as atrocities (too many, by all parties) are concerned. Even the annotation and bibliography of this sound introduction will propel those whose curiosity is piqued to read further in all directions. Copyright Â© Reed Business Information, a division of Reed Elsevier Inc. All rights reserved. From Booklist From the ample literature about the War of 1812, which includes Theodore Roosevelt's minor classic The Naval War of 1812 (1882), Borneman extracts people and events and integrates them into a popular narrative of the conflict's campaigns and battles. Ultimately, the war with Great Britain became a stalemate, lending the conflict the appearance of futility, but historians such as Andrew Jackson biographer Robert Remini regard the war as a second American war of independence. Th