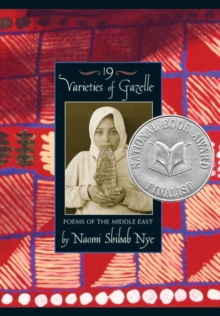 19 VARIETIES OF GAZELLE: POEMS OF THE MIDDLE EAST

Product Description "Tell me how to live so many lives at once ..." Fowzi, who beats everyone at dominoes; Ibtisam, who wanted to be a doctor; Abu Mahmoud, who knows every eggplant and peach in his West Bank garden; mysterious Uncle Mohammed, who moved to the mountain; a girl in a red sweater dangling a book bag; children in velvet dresses who haunt the candy bowl at the party; Baba Kamalyari, age 71; Mr. Dajani and his swans; Sitti Khadra, who never lost her peace inside. Maybe they have something to tell us. Naomi Shihab Nye has been writing about being Arab-American, about Jerusalem, about the West Bank, about family all her life. These new and collected poems of the Middle East -- sixty in all -- appear together here for the first time. Amazon.com Review As she grieved over the "huge shadow [that] had been cast across the lives of so many innocent people and an ancient culture's pride" after September 11, 2001, poet and author Naomi Shihab Nye's natural response was to write, to grasp "onto details to stay afloat." Accordingly, Nye has gathered over four dozen of her own poems about the Middle East and about being an Arab American living in the United States. Devoted followers of the award-winning and beloved poet will recognize some of their favorites from her earlier collections ( The Space Between Our Footsteps: Poems and Paintings from the Middle East, etc.), while absorbing themselves in her new haunting and evocative poems. Nye writes of figs and olives, fathers' blessings and grandmothers' hands that "recognize grapes, / and the damp shine of a goat's new skin." She writes of Palestinians, living and dead, of war, and of peace. Readers of all ages will be profoundly moved by the vitality and hope in these beautiful lines from Nye's heart. (Ages 9 to adult) --Emilie Coulter From Publishers Weekly Beginning with a work inspired by the events of September 11, Naomi Shihab Nye brings together 60 of her poems in 19 Varieties of Gazelle: Poems of the Middle East including "Different Ways to Pray," "The Palestinians Have Given Up Parties" and "Football." Many of the poems, which focus on the Middle East and the Arab-American experience, have appeared in previous collections; others are published here for the first time. An excellent way to invite exploration and discussion of events far away and their impact here at home. Copyright 2002 Cahners Business Information, Inc. From School Library Journal Grade 6 Up-Nye is well known as an anthologist for children, but adults have enjoyed her poetry collections for years, and many of those selections, as well as new ones, are gathered here. In her introduction, she describes the effects of the events of September 11th on her and other Arab-Americans. An introductory poem is about that day in particular; otherwise, the selections are about her family, her visits to the Middle East, and her observations of events there in general. This offering is a celebration of her heritage, and a call for peace. In "Jerusalem," she says, "I'm not interested in who suffered the most. I'm interested in people getting over it," using her poetic voice to make her point clearly and powerfully. Other poems are more particular, using family members, or meetings with friends or strangers as the frames around which her image-rich world unfolds. "My Father and the Figtree": "For other fruits my father was indifferent. He'd point at the cherry trees and say, `See those? I wish they were figs.' In the evenings he sat by our beds weaving folktales like vivid little scarves. They always involved a figtree. Even when it didn't fit, he'd stick it in." Of particular use today, this is the kind of book that young and older readers of poetry will turn back to over and over. Nina Lindsay, Oakland Public Library, CA Copyright 2002 Cahners Business Information, Inc. From Booklist Gr. 5-10. A Palestinian American raised in St. Louis and Jerusalem, Nye is a writer and anthologist whose poetry, fict