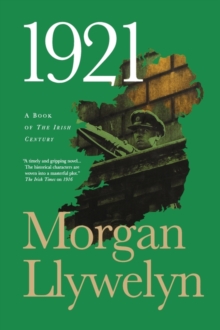 The Irish fight for independence is one of the most captivating tales of the twentieth century. Morgan Llywelyn, the acclaimed historical writer of books like Lion of Ireland, Bard and The Horse Goddess, is the writer born to bring this epic battle to life. Having created an entire body of work chronicling the Celts and Ireland, she now turns to recent Irish history to create a multivolume saga: The Irish Century.

1921 tells the story of the Irish War of Independence and the heartbreaking civil war that followed. Henry Mooney, a reporter for theClare Champion and the Irish Bulletin, is a self-described "moderate nationalist" who struggles to see the truth in the news of the day, and to report it fairly. Lacking more radical Republican beliefs of his dear friends Ned Halloran and Sile Duffy, Henry reports the political--and later, bloody--actions of his fellow Irishman from the ashes of the failed 1916 Rising to the creation of the Irish Free State to the tragic and wide-ranging battles of the Irish Civil War.

Meanwhile, Henry feels the impact of these history-changing events in his own personal life. His friendship with Ned falters when their political beliefs diverge, and an unexpected tragedy leaves them further apart than ever. Henry struggles with his passion for a well-bred Protestant Anglo-Irish woman, Ella Rutledge, and as he dutifully reports the events in the political battle for independence, he comes to realize that the Irish struggle for freedom wil leave no life untouched--and no Irish citizen with a dry eye or an untroubled heart.