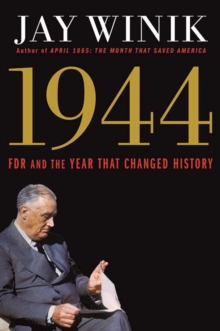 1944: FDR AND THE YEAR THAT CHANGED HISTORY

Product Description **New York Times Bestseller** Jay Winik brings to life in â€œgrippingâ€ detail ( The New York Times Book Review) the year 1944, which determined the outcome of World War II and put more pressure than any other on an ailing yet determined President Roosevelt. 1944 was a year that could have stymied the Allies and cemented Hitlerâ€™s waning power. Instead, it saved those democraciesâ€”but with a fateful cost. Now, in a â€œcomplex history rendered with great color and sympathyâ€ ( Kirkus Reviews, starred review), Jay Winik captures the epic images and extraordinary history â€œwith cinematic forceâ€ ( Time). 1944 witnessed a series of titanic events: FDR at the pinnacle of his wartime leadership as well as his reelection, the unprecedented D-Day invasion, the liberation of Paris, and the tumultuous conferences that finally shaped the coming peace. But millions of lives were at stake as President Roosevelt learned about Hitlerâ€™s Final Solution. Just as the Allies were landing in Normandy, the Nazis were accelerating the killing of millions of European Jews. Winik shows how escalating pressures fell on an infirm Roosevelt, who faced a momentous decision. Was winning the war the best way to rescue the Jews? Or would it get in the way of defeating Hitler? In a year when even the most audacious undertakings were within the worldâ€™s reach, one challengeâ€”saving Europeâ€™s Jewsâ€”seemed to remain beyond Rooseveltâ€™s grasp. â€œCompellingâ€¦.This dramatic account highlights what too often has been glossed overâ€”that as nobly as the Greatest Generation fought under FDRâ€™s command, America could well have done more to thwart Nazi aggressionâ€ ( The Boston Globe). Destined to take its place as one of the great works of World War II, 1944 is the first book to retell these events with moral clarity and a moving appreciation of the extraordinary actions of many extraordinary leaders. Review **New York Times Bestseller** "To understand the 20th century, you need to understand 1944. With his usual great research and storytelling talent, Jay Winik makes that dramatic year come alive." --Walter Isaacson, author of The Innovators and Steve Jobs "Posing as a book on President Roosevelt in 1944, this extraordinary book is in fact a compelling, comprehensive history of the Second World War told from FDRâ€™s point of view, certainly, but also featuring profound insights into Churchill, Hitler, the ordinary soldiers and civilians, and the monstrous suffering of Europeâ€™s Jews. The width of the canvas is astonishing. 1944 might have been, as Winik calls it, 'The year that changed history', but 1944 is a book that will change history-writing." --Andrew Roberts, author of Masters and Commander: How Four Titans Won the War in the West, 1941-1945 "A gifted storyteller with a proven talent for finding universal meaning in particular historical moments, Jay Winik has now turned his attention to 1944, an epochal year that shaped the way we live now. With grace and energy, he tells a vital story well, bringing those distant days back to vivid life. This is a terrific read." --Jon Meacham, author of Franklin and Winston and the Pulitzer-winning American Lion "Jay Winik is a master storyteller and in 1944 he has a horrifying, mesmerizing story to tell. FDR was a great hero of World War II, but as Winik shows, even the wisest of men can have moral blind spots. With drama, power, and passion, Winik brings to life a magnificent and terrible time." --Evan Thomas, author of Ike's Bluff and Being Nixon "Jay Winik is a master of the historical moment. His April 1865 distilled the Civil War and Reconstruction into a few fraught weeks. 1944 fittingly encompasses more time, as his canvas is larger, but it delivers the same insight and impact, in similarly vivid and compelling prose. A wonderful book!" --H. W. Brands, author of Traitor to His Class: The Privileged Life and Radical Presidency of Franklin Delano Roosevelt "Nimbly toggling between hemispheres, Winik kn