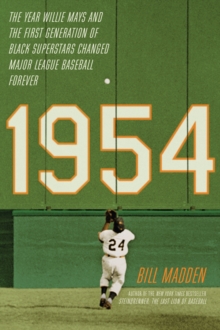 Product Description 1954: Perhaps no single baseball season has so profoundly changed the game forever. In that year?the same in which the US Supreme Court unanimously ruled, in the case of Brown vs. Board of Education, that segregation of the races be outlawed in America's public schools?Larry Doby's Indians won an American League record 111 games, dethroned the five-straight World Series champion Yankees, and went on to play Willie Mays's Giants in the first World Series that featured players of color on both teams. Â  Seven years after Jackie Robinson had broken the baseball color line, 1954 was a triumphant watershed season for black players?and, in a larger sense, for baseball and the country as a whole. While Doby was the dominant player in the American League, Mays emerged as the preeminent player in the National League, with a flair and boyish innocence that all fans, black and white, quickly came to embrace. Mays was almost instantly beloved in 1954, much of that due to how seemingly easy it was for him to live up to the effusive buildup from his Giants manager, Leo Durocher, a man more widely known for his ferocious "nice guys finish last" attitude. Â  Award-winning, New York Times bestselling author Bill Madden delivers the first major book to fully examine the 1954 baseball season, drawn largely from exclusive recent interviews with the major players themselves, including Mays and Doby as well as New York baseball legends from that era: Yogi Berra and Whitey Ford of the Yankees, Monte Irvin of the Giants, and Carl Erskine of the Dodgers. 1954 transports readers across the baseball landscape of the time?from the spring training camps in Florida and Arizona to baseball cities including New York, Baltimore, Chicago, and Cleveland?as future superstars such as Hank Aaron, Ernie Banks, and others entered the leagues and continued to integrate the sport. Weaving together the narrative of one of baseball's greatest seasons with the racially charged events of that year, 1954 demonstrates how our national pastime?with the notable exception of the Yankees, who represented "white supremacy" in the game?was actually ahead of the curve in terms of the acceptance of black Americans, while the nation at large continued to struggle with tolerance. From Booklist Madden, veteran New York Daily News baseball writer and inductee into the writersâ€™ section of the Baseball Hall of Fame, attempts here to do the sport and readers a service beyond the lines of the diamond. He dates the true and full integration of baseball, despite Jackie Robinsonâ€™s debut in 1947, to 1954, not unrelatedly the year of the Supreme Courtâ€™s Brown decision. African Americans Willie Mays and Larry Doby brought their respective teams (the Giants and Indians) to the World Series that year, and Hank Aaron and Ernie Banks, among others, were beginning to etch their considerable marks on the sport. There were some laggards (notably the Yankees and Red Sox), but, Madden argues, the sport was, by 1954, ahead of much of the rest of the country in racial matters. Regrettably, he does not make the point convincingly and often loses sight of that focus, which is buried in far more conventional accounts of franchise shifts, batting races, and pennant chases, not only in the pivotal year of 1954 but also in the years preceding it. Still, the book brings together plenty of valuable information regarding the integration of baseball. --Mark Levine Review "In 1954, many of baseball's changing dynamics and prominent personalities converged. In his revealing and carefully researched look at that pivotal season, Hall of Fame baseball writer Bill Madden makes it clear why 1954 should be regarded as one of the most significant years in the game's history." ?Bob Costas " 1954 is a book that illustrates why my friend Bill Madden is enshrined in the writers' wing of the National Baseball Hall of Fame, and one that should be read by all who love the game and its history