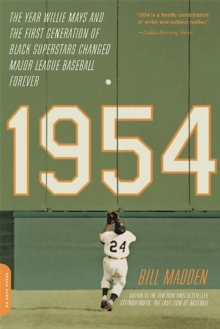 Product Description 1954?A triumphant season for black ballplayers and the country Award-winning New York Times bestselling author Bill Madden delivers the first major book to fully examine the 1954 baseball season, drawn largely from exclusive recent interviews with the major players themselves, including Willie Mays and Larry Doby as well as New York baseball legends from that era: Yogi Berra and Whitey Ford of the Yankees, Monte Irvin of the Giants, and Carl Erskine of the Dodgers. 1954 transports readers across the baseball landscape of the time as future superstars such as Hank Aaron, Ernie Banks, and others entered the leagues and continued to integrate the sport. Weaving together the narrative of one of baseball's greatest seasons wit the racially charged events of that year?the same in which the US Supreme Court unanimously ruled that segregation of the races be outlawed in America's public schools? 1954 demonstrates how our national pastime was actually ahead of the curve in terms of the acceptance of black Americans, while the nation at large continued to struggle with tolerance. Review "In 1954, many of baseball's changing dynamics and prominent personalities converged. In his revealing and carefully researched look at that pivotal season, Hall of Fame baseball writer Bill Madden makes it clear why 1954 should be regarded as one of the most significant years in the game's history." ?Bob Costas " 1954 is a book that illustrates why my friend Bill Madden is enshrined in the writers' wing of the National Baseball Hall of Fame, and one that should be read by all who love the game and its history. This is the year when baseball and the country truly found out, against the backdrop of Brown vs. Board of Education, the true and lasting significance of Jackie Robinson breaking the color line seven years before. This is about Jackie, and Willie Mays, and Henry Aaron, and about Willie's '54 Giants team, a civil rights experiment all by itself. It is an important book Madden was supposed to write, and one you will want to read." ?Mike Lupica? - About the Author Bill Madden is the author of several books about the Yankees, including the New York Times bestseller Steinbrenner: The Last Lion of Baseball. For more than 30 years, he has covered the Yankees and Major League Baseball for the New York Daily News. Madden is also the 2010 recipient of the Baseball Hall of Fame's J.G. Taylor Spink Award. He lives in New Jersey.