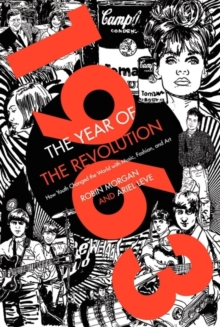 1963: THE YEAR OF THE REVOLUTION: HOW YOUTH CHANGED THE WORLD WITH MUSIC, ART, AND FASHION

Ariel Leve and Robin Morgan's oral history 1963: The Year of the Revolution is the first book to recount the kinetic story of the twelve months that witnessed a demographic power shiftâ€”the rise of the Youth Quake movement, a cultural transformation through music, fashion, politics, and the arts. Leve and Morgan detail how, for the first time in history, youth became a commercial and cultural force with the power to command the attention of government and religion and shape society.

While the Cold War began to thaw, the race into space heated up, feminism and civil rights percolated in politics, and JFKâ€™s assassination shocked the world, the Beatles and Bob Dylan would emerge as poster boys and the prophet of a revolution that changed the world.

1963: The Year of the Revolution records, documentary-style, the incredible roller-coaster ride of those twelve months, told through the recollections of some of the periodâ€™s most influential figuresâ€”from Keith Richards to Mary Quant, Vidal Sassoon to Graham Nash, Alan Parker to Peter Frampton, Eric Clapton to Gay Talese, Stevie Nicks to Norma Kamali, and many more.