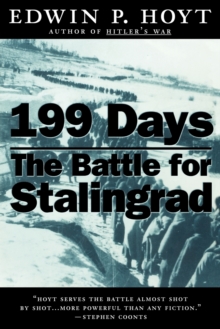 In 199 Days, acclaimed historian Edwin P. Hoyt depicts the epic battle for Stalingrad in all its electrifying excitement and savage horror. More than the bloodiest skirmish in history-a momentous conflict costing three million lives-the siege was a hinge upon which the course of history rested. Had the Red Army fallen, the Nazi juggernaut would have rolled over Russia. Had the Germans not held out during those last few months, Stalin would have painted Europe red. Now, over 50 years after the most extraordinary battle of the second millennium, the truth about this decisive moment is finally revealed.