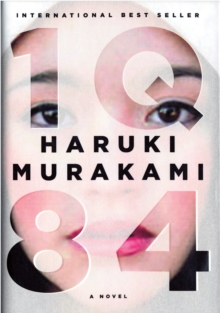 Product Description â€œMurakami is like a magician who explains what heâ€™s doing as he performs the trick and still makes you believe he has supernatural powers . . . But while anyone can tell a story that resembles a dream, it's the rare artist, like this one, who can make us feel that we are dreaming it ourselves.â€ â€” The New York Times Book Review Â  The year is 1984 and the city is Tokyo. A young woman named Aomame follows a taxi driverâ€™s enigmatic suggestion and begins to notice puzzling discrepancies in the world around her. She has entered, she realizes, a parallel existence, which she calls 1Q84 â€”â€œQ is for â€˜question mark.â€™ A world that bears a question.â€ Meanwhile, an aspiring writer named Tengo takes on a suspect ghostwriting project. He becomes so wrapped up with the work and its unusual author that, soon, his previously placid life begins to come unraveled. As Aomameâ€™s and Tengoâ€™s narratives converge over the course of this single year, we learn of the profound and tangled connections that bind them ever closer: a beautiful, dyslexic teenage girl with a unique vision; a mysterious religious cult that instigated a shoot-out with the metropolitan police; a reclusive, wealthy dowager who runs a shelter for abused women; a hideously ugly private investigator; a mild-mannered yet ruthlessly efficient bodyguard; and a peculiarly insistent television-fee collector. A love story, a mystery, a fantasy, a novel of self-discovery, a dystopia to rival George Orwellâ€™sâ€” 1Q84 is Haruki Murakamiâ€™s most ambitious undertaking yet: an instant best seller in his native Japan, and a tremendous feat of imagination from one of our most revered contemporary writers. Amazon.com Review The year is 1984, but not for long. Aomame, on her way to meet a client--the gravid implications of which only come clear later--sits in a taxi, stuck in traffic. On a lark, she takes the driver's advice, bolts from the cab, walks onto the elevated Tokyo expressway, descends an emergency ladder to the street below, and enters a strange new world. In parallel, a math teacher and aspiring novelist named Tengo gets an interesting offer. His editor has come upon an entry for a young writer's literary prize, a story that, despite its obvious stylistic drawbacks, strikes a deeply moving chord with those who've read it. Its author is a mysterious 17-year-old, and the editor proposes that Tengo quietly rewrite the story for the final round of the competition. So begins Haruki Murakami's magnus opus, an epic of staggering proportions. As the tale progresses, it folds in a deliciously intriguing cast of characters: a physically repulsive private investigator, a wealthy dowager with a morally ambiguous mission, her impeccably resourceful bodyguard, the leader of a somewhat obscure and possibly violent religious organization, a band of otherworldly "Little People," a door-to-door fee collector seemingly immune to the limits of space and time, and the beautiful Fuka-Eri: dyslexic, unfathomable, and scarred. Aomame names her new world "1Q84" in honor of its mystery: "Q is for 'question mark.' A world that bears a question.'" Weaving through it, central motifs--the moon, JanÃ¡?ek's Sinfonietta, George Orwell's 1984--acquire powerful resonance, and Aomame and Tengo's paths take on a conjoined life of their own, dancing with a protracted elegance that requires nearly 1,000 pages to reach its crowning denouement. 1Q84 was a runaway best seller in its native Japan, but it's more instructive to frame the book's importance in other ways. For one, it's hard not to compare it to James Joyce's Ulysses. Both enormous novels mark their respective author's most ambitious undertaking by far, occupy an artificially discrete unit of time ( Ulysses, one day; 1Q84, one year), and can be read as having a narrative structure that evinces an almost quantum-mechanical relationship to reality, which is not to say that either author intended this. More to the point, the English transla