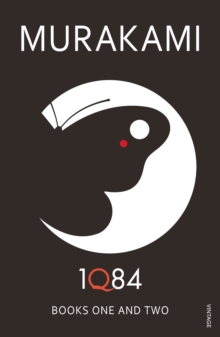 Product Description Haruki Murakami is an international phenomenon. When Books One and Two of his latest masterpiece, "1Q84", were published in Japan, a million copies were sold in one month, and the critical acclaim that ensued was reported all over the globe. Readers were transfixed by the mesmerising story of Aomame and Tengo and the strange parallel universe they inhabit. Then, one year later, to the surprise and delight of his readers, Murakami published an unexpected Book Three, bringing the story to a close. In order to reflect the experience of "1Q84's" first readers, Harvill Secker is publishing Books One and Two in one beautifully designed volume and Book Three in a separate edition. A long-awaited treat for his fans, "1Q84" is also a thrilling introduction to the unique world of Murakami's imagination. This hypnotically addictive novel is a work of startling originality and, as the title suggests, a mind-bending ode to George Orwell's "Nineteen Eighty-Four". (The number 9 in Japanese is pronounced like the letter 'Q'). The year is 1984. Aomame sits in a taxi on the expressway in Tokyo. Her work is not the kind which can be discussed in public but she is in a hurry to carry out an assignment and, with the traffic at a stand-still, the driver proposes a solution. She agrees, but as a result of her actions starts to feel increasingly detached from the real world. She has been on a top-secret mission, and her next job will lead her to encounter the apparently superhuman founder of a religious cult. Meanwhile, Tengo is leading a nondescript life but wishes to become a writer. He inadvertently becomes involved in a strange affair surrounding a literary prize to which a mysterious seventeen-year-old girl has submitted her remarkable first novel. It seems to be based on her own experiences and moves readers in unusual ways. Can her story really be true? Both Aomame and Tengo notice that the world has grown strange; both realise that they are indispensable to each other. While their stories influence one another, at times by accident and at times intentionally, the two come closer and closer to intertwining. Review "His towering new novel, his magnum opus, a work on a par with Don DeLillo's Underworld or Roberto Bolano's 2666. " -- Stephen Amidon Sunday Times "It is a work of maddening brilliance and gripping originality, deceptively casual in style, but vibrating with wit, intellect and ambition." -- Richard Lloyd Parry The Times "Critics have variously likened him to Raymond Carver, Raymond Chandler, Arthur C. Clarke, Don DeLillo, Philip K. Dick, Bret Easton Ellis and Thomas Pynchon - a roster so ill assorted as to suggest Murakami is in fact an original" New York Times "[1Q84] may become a mandatory read for anyone trying to get to grips with contemporary Japanese culture... [It is Murakami's] magnum opus." Japan Times "Murakami has likened novel-writing to a waking dream and, in a sense, what his stories resemble is a man...trying to report his dark dreams back as unpretentiously as he can. The novels' most arresting quality is that combination of intelligent earnestness with a sensibility that touches on genuine unnerving subject matter... 1Q84 involves doppelgangers, parallel worlds, alluringly enigmatic women, the occasional graphic sex scene and a distinctive blend of noir atmospherics, occult imagery and whimsical humour. The analogy of literature with dreams and alternative worlds is also brought to the fore. What 1Q84 seems to share with Orwell's dystopia is a concern with how fiction can come to dominate realist and take its place" -- Ben Jeffery Times Literary Supplement About the Author Haruki Murakami was born in Kyoto in 1949 and now lives near Tokyo. He is the author of many novels as well as short stories and non-fiction. His works include Norwegian Wood, The Wind-Up Bird Chronicle, Kafka on the Shore, After Dark and What I Talk About When I Talk About Running. His work has been translated into mo