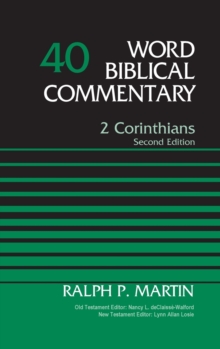 Product Description Pastors and students will appreciate this new edition with its up-to-date bibliography and discussion of pertinent issues. In this full revision and update of the book of Second Corinthians, Dr. Ralph P. Martin addresses the scholarly questions about the text of the epistle and the significance of Paulâ€™s thought for Christian living and ministry. In a penetrating analysis of Paulâ€™s responses to the various crises within the Corinthian congregation, Dr. Martin gives insight into the particular problems of Christianity as expressed in the hedonistic, cosmopolitan setting of Corinth. He shows how Paulâ€™s attempt to clearly distinguish the gospel from Hellenistic Judaism and Hellenistic Jewish Christian ideology results in a moving statement of the Christian message. Rather than the â€œtheology of gloryâ€ prevalent in Corinth, Paul articulates his theology of the Cross as a â€œtheology of weakness,â€ of servanthood and ministry. What was at stake at Corinth, says Dr. Martin, was â€œnothing less than the essence of the kerygma as in expressed in the way of the cross. . . for proclamation and daily living.â€ New sections on the Collection and Rhetoric have been added, and the issues of Composition and Social Setting of the letter have been included, along with topics such as the Spirit, the Opponents, Paul's Theology, and the Resurrection in this epistle. Â  The Word Biblical Commentary series offers the best in critical scholarship firmly committed to the authority of Scripture as divine revelation. It is perfect for scholars, students of the Bible, ministers, and anyone who wants a theological understanding of Scripture. About the Author Ralph P. Martin (1925-2013) was Distinguished Scholar in Residence at Fuller Theological Seminary and a New Testament Editor for the Word Biblical Commentary series. He earned the BA and MA from the University of Manchester, England, and the PhD from King's College, University of London. He was the author of numerous studies and commentaries on the New Testament, including Worship in the Early Church, the volume on Philippians in The Tyndale New Testament Commentary series. He also wrote 2 Corinthians and James in the WBC series. Nancy L. deClaissÃ©-Walford (PhD,Â Baylor University) is the Carolyn WardÂ Professor of Old Testament and BiblicalÂ Languages at the McAfee School ofÂ Theology at Mercer University in Atlanta,Â Georgia. She is the author of Reading fromÂ the Beginning: The Shaping of the HebrewÂ Psalter, Biblical Hebrew: An IntroductoryÂ Textbook, Introduction to the Psalms: A SongÂ from Ancient Israel, and The Book of PsalmsÂ (NICOT). Lynn Allan Losie isÂ Associate Professor of New Testament at Azusa Pacific University.Â A generalist in New Testament studies, Dr. Losie teaches courses in the Gospels, the Acts of the Apostles, and the Pauline Epistles, as well as in the background areas of Greek, early Judaism, and the greater Hellenistic World. He has published articles on the New Testament and had served as the associate New Testament editor of the Word Biblical Commentary (1997 - 2013). Ordained as a Baptist minister, he has also served in pastoral ministry in Southern California and Oregon.