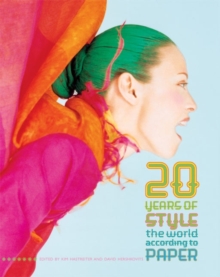 20 YEARS OF STYLE: THE WORLD ACCORDING TO PAPER

For the legions of Paper Magazine fans, and anyone who's interested in Where Style Starts. This stunning portrayal of the last 20 years is a wonderful commemorative look at the life and times of the era. Following introductions and commentary by a virtual who's who of popular culture, 20 Years of Style charts just how style has evolved over the past twenty years, illustrating the huge influence that underground cultures from the worlds of art, music, film, sports and urban street life ultimately have played on mainstream fashion. Laid out by year starting in 1984 and continuing through the present, this star-studded journey cannot be described by words alone.