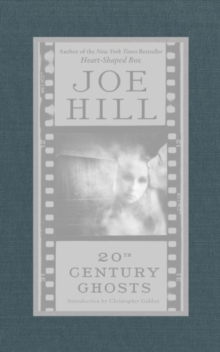 Product Description From the New York Times bestselling author of NOS4A2 and Horns comes this award-winning collection of short fiction. Imogene is young, beautiful . . . and dead, waiting in the Rosebud Theater one afternoon in 1945. . . . Francis was human once, but now he's an eight-foot-tall locust, and everyone in Calliphora will tremble when they hear him sing. . . . John is locked in a basement stained with the blood of half a dozen murdered children, and an antique telephone, long since disconnected, rings at night with calls from the dead. . . . Nolan knows but can never tell what really happened in the summer of '77, when his idiot savant younger brother built a vast cardboard fort with secret doors leading into other worlds. . . . The past isn't dead. It isn't even past. . . . Â  Review â€œAlternately sad, scary, strange and at times even sweet, these tales will haunt you long after youâ€™ve read them.â€ (Parade (a "Parade Pick")) â€œ[A] lovely, earnest collection of short fiction.â€ (Village Voice) â€œ[O]ne of the best [horror] collections of the year. Hill is a relative newcomer who consistently creates creepy, very disturbing stories.â€ (Locus) â€œEach tale is unique, and the collection proves that Hillâ€™s talent is not limited to horror, but extends well into the mainstream.â€ (Denver Rocky Mountain News) â€œ[An] inventive collection . . . brave and astute.â€ (New York Times Book Review (Editor's Choice)) â€œ[A] new take on the fantasy-horror genre...Highly recommended.â€ (The Sun Herald (Sydney, Australia)) â€œThe selections range from the mundane to the surreal, with a strong emphasis on the kind of horror tale perfected by Ray Bradbury, Peter Straub and Stephen King.â€ ( San Francisco Chronicle) â€œThis solid, inventive, scary collection of stories reveals a writer who has thought hard about the problematics of horror.â€ (New York Times on 20TH CENTURY GHOSTS) â€œEach of these chilling tales arrests you from the opening sentence and leads you ? trustingly, thanks to the simple mastery of the story-teller ? into a place of gulping fear.â€ (Daily Mail (London) on 20TH CENTURY GHOSTS) â€œSubtle and disturbing in equal measure.â€ (Coventry Telegraph on 20TH CENTURY GHOSTS) From the Back Cover Imogene is young and beautiful. She kisses like a movie star and knows everything about every film ever made. She's also dead and waiting in the Rosebud Theater for Alec Sheldon one afternoon in 1945. . . . Arthur Roth is a lonely kid with big ideas and a gift for attracting abuse. It isn't easy to make friends when you're the only inflatable boy in town. . . . Francis is unhappy. Francis was human once, but that was then. Now he's an eight-foot-tall locust and everyone in Calliphora will tremble when they hear him sing. . . . John Finney is locked in a basement that's stained with the blood of half a dozen other murdered children. In the cellar with him is an antique telephone, long since disconnected, but which rings at night with calls from the dead. . . . About the Author Joe HillÂ is the #1Â New York TimesÂ bestselling author of the novelsÂ The Fireman, NOS4A2, Horns,Â andÂ Heart-Shaped Box; Strange Weather, a collection of novellas; and the prize-winning story collectionÂ 20th Century Ghosts. He is also the Eisner Award-winning writer of a six-volume comic book series,Â Locke & Key. Much of his work has been adapted for film and TV, including NOS4A2Â (AMC),Â Locke & KeyÂ (Netflix), andÂ In the Tall GrassÂ (Netflix).