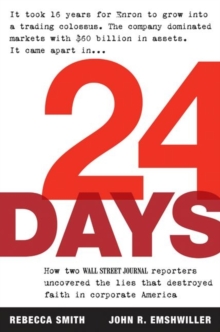 This is the story of Rebecca Smith and John R. Emshwiller, the two reporters who led the Wall Street Journal's reporting on Enron and uncovered the unorthodox partnerships at the heart of the scandal through skill, luck, and relentless determination.

It all started in August 2001when Emshwiller was assigned to write a supposedly simple article on the unexpected resignation of Enron CEO Jeff Skilling. During his research, Emshwiller uncovered a buried reference to an off-balance-sheet partnership called LJM. Little did he know, this was the start of a fast and furious ride through the remarkable downfall of a once highly-prized company.

Written in an intense, fast paced narrative style, 24 Days tells the gripping story of the colossal collapse of what would become the world's most notorious corporation. The reader follows along as Smith and Emshwiller continue to uncover new partnerships and self-dealing among the highest levels of Enron's management. As they publish articles detailing their findings in the Journal, Wall Street and individual investors have a crisis of confidence and start selling Enron stock at unprecedented levels of volume. In the end - 24 short days later - Enron had completely collapsed, erasing 16 years of growth and losing $19 billion in market value while watching the stock drop from $33.84 to $8.41. Not only was the company destroyed, but investors and retired employees were completely wiped out-all the while Enron executives were collecting millions of dollars.

Climaxing with this 24-day period, this book shows the reporter's-eye view of a David-and-Goliath battle between journalists and a giant corporation. Each day a new story uncovered another fact; each day the company issued denials. And when the investigative stories reached critical mass and momentum, the stock market cast its final vote of no confidence. In the tradition of Indecent Exposure and Barbarians at the Gate, two other grippi