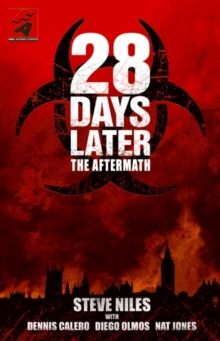 Product Description Two idealistic scientists unwittingly developing the deadliest virus the world has ever known...A family making desperate choices as they struggle to survive the Infection's initial outbreak...A lone gunslinging survivor battling the Infected in a decimated London...Four original tales chronicling the greatest horror humanity has ever faced come together in a bloody conclusion as terrifying as the Rage Virus itself. Written by horror master Steve Niles (creator of the classic 30 Days of Night) and illustrated by three of the most terrifyingly talented illustrators working in comics today, 28 Days Later: The Aftermath begins before the hit movieâ€”and ends with a shocking revelation that leads into the events of the sequel, 28 Weeks Later. From Publishers Weekly Gruesome rules in this horror collection. Despite the title, the four stories actually are set before or at the same time as the action of the 2002 film about the horrifying consequences of a manmade virus that infects humans with mindless rage, turning them into carnivorous brutes who infect others by spewing virus-laden blood. Niles's scripts (one of which is included as a bonus text feature) show the creation of the virus by ethically challenged researchers, describe its uncontrollable spread as zomboid mobs wipe out most of humanity, and question whether the survivors deserve to survive. Like the movie, the stories also juxtapose the rationalizations that we use to justify violenceâ€”idealism, pride, revenge, love, etc.â€”with the behavior of the infected monsters. The characters aren't especially interesting beyond that: some infected zomboids totter around, puking blood and exclaiming Ghaaaagh! while others dither and wait for death. Of the multiple artists at work, Calero's two stories, Stage 1: Development and Stage 4: Quarantine, effectively combine glimpses of light with masses of darkness, and Nat Jones (Stage 3: Decimation) mixes scratchy agitated line work with a muted wash, especially in a two-page spread of a ruined Piccadilly Circus. Mainly, however, the art is just graphic enough to satisfy readers' cravings for literal blood and guts. (Apr.) Copyright Â© Reed Business Information, a division of Reed Elsevier Inc. All rights reserved. Review â€œ[Niles] ably weaves together four separate tales that each feature those blood-spewing zombies and the mayhem they create.â€ (Atlanta Journal-Constitution) â€œRecommended!â€ (Dreadcentral.com) â€œ[W]ill evoke excitement and appreciation...with its fine combination of a well-written story and beautifully disturbing artwork.â€ (Fangoria.com) â€œGotta have itâ€ (Wisconsin State Journal, Rob Thomas' "Gotta Have It" List) â€œGruesome rules in this horror collection.â€ ( Publishers Weekly) â€œAs far as zombie comics go, [this] is definitely ahead of the shambling, brain-eating pack.â€ (Ain't It Cool News.com) â€œ[A] quick paced, intense ride for the 28 Days Later lover in all of us...slick and intelligent.â€ (joblo.com) â€œThe art...is fantastic...Horror Buffsâ€“give it a once-over. Itâ€™ll whet your appetite for the film!â€ (Comics Alliance.com) â€œ[A] fine bridge between the two movies [28 Days Later and 28 Weeks Later].â€ (Kevin Carr, 7mpictures.com) â€œThis is high-octane horror magnificently illustrated with gory brio.â€ (Count Gore.com) About the Author Steve Niles is a film producer and writer of screenplays including the classic 30 Days of Night which is being made into a film produced by the legendary Sam Raimi for release in October 2007. Named by Fangoria magazine as one of the "13 rising talents who promise to terrify us for the next 25 years" is also penning the upcoming films Bigfoot (which he co-created with rocker Rob Zombie) and The Lurkers. He lives in Los Angeles.