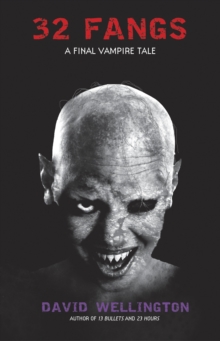 Product Description The Final Reckoning Laura Caxton's battles against the ancient vampire Justinia Malvern have cost her nearly everythingâ€”her badge, her freedom, her friends and family . . . maybe even her humanity. And as she hides out in the deepest backwoods of Pennsylvania, pursued by the cops who were once her colleagues, Laura certainly looks beaten. But as Laura sees it, what little is left of her soul is perfectly adapted to the job of ridding the world of its last vampire. And thanks to the terrible clarity she's found, Laura's come up with a planâ€”one that will finish Malvern once and for all. But the ever-wily Malvern has a few last aces left to play and is quietly dealing a hand that will involve a terrible fate for the few friends Laura's got left. When the two adversaries meet for the last time in their most epic battle, the vampires will force Laura to pay a price far beyond anything she's sacrificed before. About the Author DAVID WELLINGTON is the author of four previous books in the Laura Caxton series, as well as the werewolf novels Frostbite and Overwinter and the Monster Island trilogy. Excerpt. Â© Reprinted by permission. All rights reserved. 1702 â€œWhat kind of monster are ye?â€ Father demanded, as he slammed his fists again and again into Uncle Reginaldâ€™s stomach. â€œThe girlâ€™s but seven years old!â€ â€œJames, I beg of ye, stop! I am wholly innocent!â€ Uncle screamed. Just as heâ€™d been screaming since the beating began. â€œShe demanded I give her a piece of candy, and I simply refused, but--â€ â€œ?â€™Tis not the way she tells it,â€ Father insisted. He turned away for a moment, seething with rage, and took up the first thing to hand--a pair of iron sheep shears, honed to a razor edge. He drove the blades of the shears deep up under Uncleâ€™s rib cage and twisted them. Uncle Reginald stopped screaming then, but his whole body convulsed as the blade dug through flesh and sinew. Foam flecked his lips, and his eyes, which had been swollen shut with bruises, bulged outward from their sockets. â€œShe says ye offered her some candy if she would take down her small clothes. Seven years old!â€ Uncle made no reply. It did not occur to the girl that he might already be dead. Clearly it did not occur to Father, either, as he drove the blade of the shears home again and again. The girl stepped backward as blood spread across the straw-covered floor of the barn. Behind her the sheep stared placidly at the scene, wholly disinterested spectators. Eventually Father threw down the shears, and wiped one gore-coated hand across his mouth. He was breathing heavily and sweat poured down his bald head and pooled in his ears. He turned to look at the girl and the expression on his face was one she would never forget. He was not angry anymore. His face had gone as pale as paper and his mouth hung open, his slack lips wide to suck in breath. In his eyes was a look of desperate pleading. He wanted something from the girl. But what? Thanks, for what heâ€™d done? The validation of knowing heâ€™d done the right thing, been a good father? Or simple forgiveness? She would never know. She would never, in fact, see her father after this day. He would be taken to the assizes, given a quick trial, and hanged in the town square as a fratricide. But all that was in the future. This special moment, this very first of her murders, was frozen in time as she stood before the sheep and away from the spreading pool of blood that threatened to touch her shoes. She was too young to comprehend what had just happened. She was only peripherally aware that something very important, something consequential, had changed in the barn. There had been three people there. Now there were two. Father dropped the shears and ran out through the wide doors, into the sunlight. He did not speak to her before he left. The girl was left alone with the corpse. Uncleâ€™s eyes had receded back behind their lids and he wasnâ€™t moving, not at all. The blood parted as it rolled ar