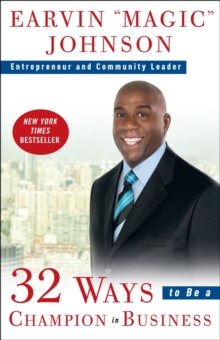 32 WAYS TO BE A CHAMPION IN BUSINESS

Product Description As a young man, Earvin â€œMagicâ€ Johnson admired his father and other small-town entrepreneurs who created jobs and served as leaders in his Midwestern community. He worked for them, watched them, and his interest in building communities through economic development grew even while his basketball career flourished. His fame as an NBA star gave him access to some of the most successful business leaders in the country. It was Earvinâ€™s own entrepreneurial spirit that inspired them to serve as his mentors. Earvin made the transition from great athlete to greater entrepreneur through hard work and by avidly pursuing opportunities. He recognized that densely populated urban communities were ripe for commercial and residential development. He partnered with major brands like Starbucks, 24 Hour Fitness, and T.G.I. Fridayâ€™s to lead a major economic push in these communities. The success of his businesses proved that ethnically diverse urban residents would welcome and support major brands if given the opportunity. Earvin continues to be a leader of urban economic development that provides jobs, goods, and a new spirit of community. 32 Ways to Be a Champion in Business will inspire and enlighten readers who wish to make a similar impact with their careers and business endeavors. About the Author EARVIN â€œMAGICâ€ JOHNSONâ€”known worldwide for his talent on the basketball courtâ€”has an equally impressive career off the court. As the chairman and chief executive officer of Magic Johnson Enterprises, he has helped launch major business initiatives focused on revitalizing ethnically diverse urban communities by bringing brand-name businesses into them. He has been voted number one among organizations and individuals in representing the urban community, and is the celebrity most able to influence minority consumer purchasing. For speaking engagements or to book Earvin â€œMagicâ€ Johnson for your next corporate enÂ­gagement, e-mail: [email protected] Excerpt. Â© Reprinted by permission. All rights reserved. Chapter 1 The Mission Each of us can make a difference, even if it is one street corner at a time. My father and other entrepreneurs in my hometown, Lansing, Michigan, were my first business role models and mentors. Later, I got to know major entertainment executives such as Joe Smith of Elektra/Asylum Records and Peter Guber of Sony Pictures because they had courtside Lakers tickets. When we socialized after games, theyâ€™d ask me about basketballâ€”and Iâ€™d pick their brains about business. Â  Still, it was J. Bruce Llewellyn, one of the most successful black men in America, who sent me off with a mission on my journey from basketball player to businessman. The son of Jamaican immigrants, he built an empire that includes one of the nationâ€™s largest Coca-Cola distributorships, a cable and broadcasting company, and Essence magazine. Â  When we met, I got right to the point. Â  â€œI want to be a businessman after basketball,â€ I told him. â€œI want to make a lot of money like you.â€ Â  Mr. Llewellyn let me babble on like that for several minutes before he cut me off with a wave of his hand. Â  â€œNo, Magic,â€ he said; â€œif money is all you want, there willnever be enough of it and you will never be happy. Youâ€™ve got to be about more than that.â€ Â  He had my attention. What did he mean? Â  â€œYou have the opportunity to be a leader who can do great things and change peopleâ€™s lives for the better,â€ he said. â€œYou can be a businessman who is also a catalyst for change.â€ Â  This great entrepreneur offered me more than Iâ€™d bargained for. Since high school, Iâ€™d sought out advice from every successful businessperson Iâ€™d met. This was the first person who had a bigger vision for me than I had for myself. Â  A catalyst for change? Â  That was a role Iâ€™d never imagined. I thought you had to be Nelson Mandela or the Reverend Martin Luther King, Jr., to change the world. I learned instead that each of us can make a difference, even if it is one street c