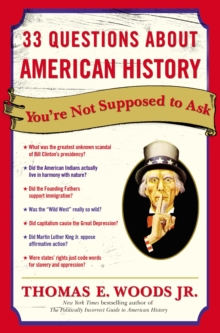 33 QUESTIONS ABOUT AMERICAN HISTORY YOU'RE NOT SUPPOSED TO ASK

Product Description News flash: The Indians didnâ€™t save the Pilgrims from starvation by teaching them to grow corn. The â€œWild Westâ€ was more peaceful and a lot safer than most modern cities. And the biggest scandal of the Clinton years didnâ€™t involve an intern in a blue dress. Surprised? Donâ€™t be. In America, where history is riddled with misrepresentations, misunderstandings, and flat-out lies about the people and events that have shaped the nation, thereâ€™s the history you know and then thereâ€™s the truth. In 33 Questions About American History Youâ€™re Not Supposed to Ask, New York Times bestselling author Thomas E. Woods Jr. reveals the tough questions about our nationâ€™s history that have long been buried because theyâ€™re too politically incorrect to discuss, including: Are liberals really so antiwar? Was the Civil War all about slavery? Did the Framers really look to the American Indians as the model for the U.S. political system? Did Bill Clinton actually stop a genocide in Kosovo, as weâ€™re told? The answer to all those questions is no. Woodsâ€™s eye-opening exploration reveals just how much of the historical record has been whitewashed, overlooked, and skewed beyond recognition. 33 Questions About American History Youâ€™re Not Supposed to Ask will have you wondering just how much of your nationâ€™s past you havenâ€™t been told. About the Author THOMAS E. WOODS JR. is a New York Times bestselling author and contributing editor of The American Conservative. Excerpt. Â© Reprinted by permission. All rights reserved. QUESTION1 Did the Founding Fathers Support Immigration? Though polls consistently find that a majority of Americans believe immigration levels need to be reduced, many people still assume that the right of immigration is a hallowed American principle that no loyal citizen can consistently oppose. This assumption is false. Actually, the Founding Fathers were generally wary of immigration. They did not wish to exclude it altogether, but they saw no particular need to encourage it, especially among migrants whose cultural backgrounds were significantly different from their own. Consider Benjamin Franklin, that well-known cosmopolite and child of the Enlightenment. Franklin, it turns out, said quite a few politically incorrect things about non-British humanity (a category that includes the present writer). On one occasion he asked, "Why should Pennsylvania, founded by the English, become a colony of aliens, who will shortly be so numerous as to Germanize us, instead of our Anglifying them, and will never adopt our language or customs any more than they can acquire our complexion?" Thus immigrants of sufficient number and concentration could radically change the cultural landscape in ways that the native population might not want. We can already hear the modern liberal laughing at Franklin, pointing triumphantly to German assimilation in America as proof that the Pennsylvanian's concerns were without merit. But the point here is simply this: if unrestricted immigration had really been a traditional American principle, someone must have forgotten to tell Benjamin Franklin. And he was speaking of people who, as fellow heirs and architects of Western civilization, shared a great deal in common with the original settlers of British America. One can only imagine what Franklin would have had to say about current immigration policy. JEFFERSON AND HAMILTON ON IMMIGRATION Franklin was not alone. Thomas Jefferson's warning about mass immigration in his Notes on Virginia would doubtless come as a surprise to most Americans, since most American history textbooks for some reason choose not to highlight it. Jefferson asked suggestively, "Are there no inconveniences to be thrown into the scale against the advantage expected by a multiplication of numbers by the importation of foreigners?" "It is for the happiness of those united in society," the sage of Monticello went on to explain, "to harmonize as much as possi