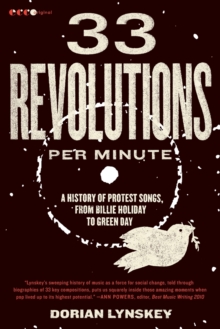 33 REVOLUTIONS PER MINUTE: A HISTORY OF PROTEST SONGS, FROM BILLIE HOLIDAY TO GREEN DAY

Product Description From one of the most prominent music critics writing today, a page-turning and wonderfully researched history of protest music in the twentieth century and beyond Nowhere does pop music collide more dramatically with the wider world than in the protest song, which forces its way into the news and prompts conversations from Washington to Westminster. Rather than being merely a worthy adjunct to the business of pop, protest music is woven into its DNA. When you listen to Bob Dylan, Stevie Wonder, Public Enemy, or the Clash, you are not sitting down to a dusty seminar; you are hearing pop music at its most thrillingly alive.Â  33 Revolutions Per MinuteÂ is the story of protest music toldÂ inÂ 33 songs. An incisive history of a wide and shape-shifting genre, Dorian Lynskey's authoritative bookÂ takes us from the days of Billie Holliday crooning â€œStrange Fruitâ€ before shocked audiences to Vietnam-era crowds voicing their resentment at the sounds of Bob Dylan to the fracas over the Dixie Chicksâ€™ comments against George W. Bush during the Iraq War.For anyone who enjoyed Alex Rossâ€™sÂ  The Rest is Noise, Bob Dylanâ€™sÂ  Chronicles, or Simon Reynoldsâ€™Â  Rip It Up and Start Again,Â  33 Revolutions Per MinuteÂ is an absorbing and moving portrait of a century when music was the peopleâ€™s truest voice. From Publishers Weekly The protest song reached its zenith in 1960s America when Bob Dylan, Buffalo Springfield, Country Joe and the Fish, Jimi Hendrix, and Joan Baez wrote popular songs to protest American involvement in the Vietnam War and the mistreatment of social and economic groups. In some casesâ€”Dylan's "Masters of War," P.F. Sloan's "Eve of Destruction," Country Joe McDonald's "I-Feel-Like-I'm-Fixin'-to-Die Rag"â€”the songs became anthems that defined a generation, confirming the idea that popular music could indeed bring people together to promote a common cause for the common good. Sadly, British music critic Lynskey doesn't capture the deep significance of the protest song or the cultural moments that created them. Although he admirably attempts to isolate the personal and cultural contexts of 33 protest songs, from Billie Holiday's "Strange Fruit" and James Brown's "Say It Loudâ€”I'm Black and I'm Proud" to the Clash's "White Riot," Public Enemy's "Fight the Power," and Steve Earle's "John Walker's Blues," Lynskey doesn't fully demonstrate the reasons that each song qualifies as a protest song in the first place, or why the songs he gathered provide the best examples of a protest song. (Apr.) (c) Copyright PWxyz, LLC. All rights reserved. Review â€œThis book is impressive in scope.â€ ( New Yorker) â€œA longtime music critic, Lynskey presents up-close details to ballast the bookâ€™s larger historical sweep.â€ ( Los Angeles Times) â€œLynskey has a strong command of the music and its makers.â€ ( Wall Street Journal) â€œlovely writingâ€¦Letâ€™s praise the agile, many-tentacled writer Mr. Lynskey can often be, because I loved bits of this book; you can pluck out the many tasty things like seeds from a pomegranate.â€ ( New York Times) â€œBritish music critic Dorian Lynskey offers a completely absorbing look at 33 songs, spanning seven decades and haling from five continents...Comprehensive and beautifully written.â€ ( Booklist (starred review)) â€œ[A] provocative, absorbing bookâ€ ( Cleveland Plain Dealer) â€œA must-read for militant-music lovers.â€ (The Root) From the Back Cover From one of the United Kingdomâ€™s most prominent music critics, a page-turning and wonderfully researched history of 33 songs that have transformed the world through the twentieth century and beyond. When pop music meets politics, the results are often thrilling, sometimes life-changing, and never simple. The protest songs of such great artists as Woody Guthrie, Bob Dylan, Stevie Wonder, U2, Public Enemy, Fela Kuti, R.E.M., Rage Against the Machine, and the Clash represent pop music at its most charged and relevant, providing the soundtrack and informing social