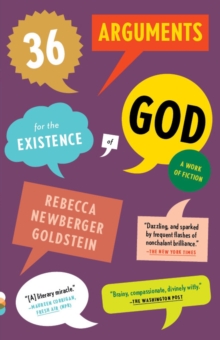 36 ARGUMENTS FOR THE EXISTENCE OF GOD: A WORK OF FICTION (VINTAGE CONTEMPORARIES)

Product Description From the author of The Mind-Body Problem: a witty and intoxicating novel of ideas that plunges into the great debate between faith and reason. Â  At the center is Cass Seltzer, a professor of psychology whose book, The Varieties of Religious Illusion, has become a surprise best seller. Dubbed â€œthe atheist with a soul,â€ he wins over the stunning Lucinda Mandelbaumâ€”â€œthe goddess of game theory.â€ But he is haunted by reminders of two people who ignited his passion to understand religion: his teacher Jonas Elijah Klapper, a renowned literary scholar with a suspicious obsession with messianism, and an angelic six-year-old mathematical genius, heir to the leadership of an exotic Hasidic sect. Â  Hilarious, heartbreaking, and intellectually captivating, 36 Arguments explores the rapture and torments of religious experience in all its variety. Review â€œDazzling, and sparked by frequent flashes of nonchalant brilliance.â€â€”The New York Timesâ€œBrainy, compassionate, divinely witty.â€â€”The Washington Postâ€œ[A] literary miracle.â€â€”Maureen Corrigan, â€œFresh Air,â€ NPRâ€œRebecca Goldstein is a rare find among contemporary novelists: she has intellectual muscle as well as a tender emotional reach.â€ â€”Ian McEwanâ€œDeeply moving and a joy to read.â€ â€”Jonathan Safran Foer, author of Extremely Loud and Incredibly CloseÂ â€œCaptivating, original, and at times riotously funny.â€ â€”CommentaryÂ â€œCompelling, heady . . . and laced with a deliciously dark wit.â€ â€”Boston GlobeÂ â€œThoughtful, witty, andâ€”I cannot stress enoughâ€”really entertaining.â€ â€”Christian Science Monitor"Goldstein can make Spinoza sing and GÃ¶del comprehensible, and in her cerebral fiction she dances across disciplines with delightâ€¦.36 Arguments radiates all the humor and erudition we've come to expect from Goldstein, and despite the novel's attention to the oldest questions, it has arrived at exactly the right moment. ... One of the funniest [academic satires] ever written. ...Goldstein doesn't want to shake your faith or confirm it, but she'll make you a believer in the power of fiction."â€”TheÂ Washington Post"When Rebecca Goldstein, the American philosopher-novelist who looks like Rapunzel but thinks like Wittgenstein, was awarded the prestigious MacArthur Award (commonly known as the â€œgenius awardâ€) in 1996, she was praised for her ability to â€œdramatise the concerns of philosophy without sacrificing the demands of imaginative storytellingâ€. That is putting her achievements lightly. Her most recent book,Â 36 Arguments for the Existence of God, is a vastâ€¦.which is nonetheless possessed of a steely intellectual coherence that is frighteningly impressive to behold."â€”The TimesÂ (London)â€œ36 Arguments for the Existence of GodÂ affirms Ms. Goldsteinâ€™s rare ability to explore the quotidian and the cosmological with equal ease. ...The novelâ€™s bracing intellectual energy never flags. ... It affirms Ms. Goldsteinâ€™s position as a satirist and a seeker of real moral questions at a time when silly ones prevail."â€” The New York Timesâ€œHilariously irreverent. . . . The draw of transcendental longings, Seltzer discovers, is not to be found in logical proofs but in the accumulated wonder of all that can be encountered in this life: love, family, the sheer privilege of being alive.â€ â€”Financial Times (London)Â Â â€œ400 pages of smartsâ€¦.[36 Arguments] lays out a great range of witticisms, echoes and allusions.â€Â  â€”London Review of Books"Like an answer to a fevered prayer. ... Part academic farce, part metaphysical romance, all novel of ideas,Â 36 Arguments for the Existence of GodÂ may not settle the question of whether God exists but it does affirm the phenomenon of literary miracles."â€”Maureen Corrigan, â€œFresh Air,â€ NPRâ€œA looping tale [with] affectionate irony about academic life, culture wars, and relationships in turn-of-the-millennium Americaâ€¦.[With] the same engaging cocktail of philosophy, roman a clef fun, and scholarly soap opera that marked her earlier booksâ€¦.She shows off all her considerable smarts. . . . Pl