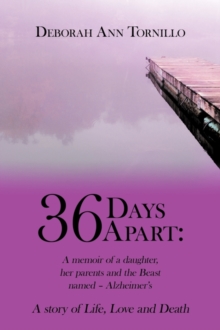 36 DAYS APART: A MEMOIR OF A DAUGHTER, HER PARENTS AND THE BEAST NAMED – ALZHEIMER’S: A STORY OF LIFE, LOVE AND DEATH.

A memoir of a daughter, her parents and the Beast named - Alzheimer's: A story of Life, Love and Death, Deborah Ann Tornillo chronicles the time spent taking care of her mother and father, both of whom were diagnosed with Alzheimer's in February 2006."I didn't know when I would tell this story, I just knew I would," Tornillo writes. "Both my mother and father had Alzheimer's; my Mom was further along in the disease process than my Dad. It was an incredible journey spending the last year and a half of their life with them, slowly watching the disease take its toll." 36 Days Apart recounts this painful, enlightening journey, and Tornillo writes candidly about the struggles and fears she faced as her parents' caregiver. When the diagnosis came in 2006, Tornillo bravely faced the reality that she would need to take care of them full-time. At first, this entailed monthly flights back and forth to her home state, but it quickly became apparent that the Alzheimer's was progressing in both parents much more quickly than first anticipated. As their disease progressed, Tornillo was faced with the difficult task of learning how to be a parent to her own parents. Through the year and a half of caring for them she extensively researched Alzheimer's in order to provide the best care possible, all the while knowing that the disease would eventually win in the end. She found herself saying goodbye to her father first, but little did she know that her mother would pass away just 36 days later. 36 Days Apart gives an honest, unflinching look at the realities of caring for and losing loved ones to Alzheimer's. Tornillo gives the reader an inside look into the day-to-day life she faced during her heartbreaking, difficult time. "The two most important things I learned from my parents as we traveled this road together was how to stay strong in faith and never lose compassion for others or myself," she writes. "I was blessed to have lea