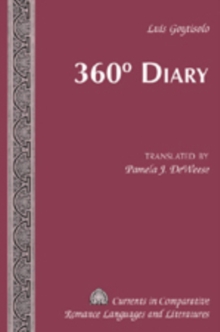 Luis Goytisoloâ€™s novel, 360Âº Diary, constitutes a reflection on the act of creativity. The novel is in the form of a diary that begins on the authorâ€™s birthday and concludes one (lunar) year later. Each day of the week is identified with a theme such as the seasons; the broad movements of history; the biological and psychological cycles of all living beings; and time itself. The author of the diary contemplates and acts upon all the various kinds of knowledge that have come together in his person, either through study, experience, or intuition. Just as in his most well-known novel, AntagonÃ­a, Goytisolo uses 360Âº Diary to explore the human condition and the diverse ways in which the individual comes to know and understand, in whatever limited way, the possibilities of human existence. The totality is a comprehensive, 360Âº view of contemporary life by an artist employing everything he has learned so as to communicate with the reader willing to follow him in his reflections and, ideally, use them as a starting point for his/her own ideas.